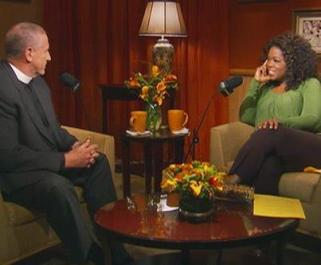 Rev. Ed Bacon doesn’t want everyone in church on Sundays. More concerned with filling hearts rather than filling pews, he has no problems with anyone who enjoys wonderful Sunday morning experiences elsewhere.

Taken aback by his statement, Oprah asked him to elaborate on spirituality, the main theme of yesterday’s Super Soul Sunday session. He came up with the following definition which resonated with Oprah and many of her followers on Twitter and Facebook.

Spirituality is the experience of feeling unconditionally loved so powerfully that you know there is some Power greater than you. And it fills you so much that you want to share that feeling with others.

Throughout yesterday’s program, Bacon stressed the fact that everyone is equally advantaged before God and we should all be moving toward creating a human family.  He acknowledged the challenges and gave practical advice on dealing with anger and conflict.

I was very impressed by this extraordinary thinker, often referred to as the chief spiritual officer at All Saints Episcopal Church in Pasadena. While reading about his early life, I discovered that Bacon was greatly influenced by Dr. Martin Luther King Jr. A chance meeting at the Atlanta airport in 1967 inspired Bacon to reread the Bible using a different lens, one inspired by universal compassion.

The kingdom of God is within you. You are your own priest.

Satan and the ego are the same thing.

Save us from those who think evil is external.

In every moment, there is something sacred at stake.

The cockpit shakes the most just before breaking the sound barrier.

Spiritual nourishment at its best! 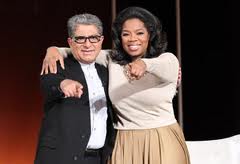 Throughout the two-hour program, Oprah and Deepak Chopra discussed and  answered questions about spirituality. I particularly liked the segment where he shared his STOP formula for controlling unwanted thoughts.

O=Observe what is happening in your body

P=Proceed with kindness and compassion

5. We are spiritual beings having a human experience.

4.  The highest form of intelligence is being able to observe yourself without judgment.

2.  I use memories, but I do not allow memories to use me.

1.  The past is gone. The future is not here. Now I am free of both. Choose joy.

What is your favourite quote?