I’m thrilled and grateful to be on Joanne Guidoccio’s blog today. I’d like to share with you the top ten influences in my life that led me to become an author.

1. I loved to write witches’ cookbooks as a child. The concoctions I came up with included bloody, bony bananas, puffed dragon’s eyes, and sauteed troll toes. I wish I still had a copy of one of those cookbooks, but sadly, they are gone forever. At least the memories of badgering the neighbor boys to try these gruesome remedies remain.

2. I also had several puppets and a mini theatre which became the inspiration to create a couple plays, who-done-it murder mysteries. Unfortunately, I have no idea what became of them either. I wondered about writing in the future in only a fleeting way.

3. As a teenager I couldn’t get enough information about the Salem Witch Trials or colonial history. Fascinated to learn about the psychological motives of those who accused others and the possible connection to the supernatural, I was determined to learn more, and did so during countless hours reading and researching.

4. I forgot about my childhood interests of witch cookbooks, puppet drama, and long reads about witch trials to pursue more practical endeavors such as maternity nursing, public health, a Peace Corps tour of duty in Thailand, and an herbal apprenticeship in North Carolina, not realizing that these adult endeavors would give me the experience I needed to write my first novel.

5. Upon moving to Windsor, Connecticut in the winter of 2005, I truly had no idea that what I would discover there would propel me into the writing profession. It all started when my neighbor, Joan, casually brought up the fact that the townspeople of Windsor accused Alice ‘Alse’ Young of witchcraft during a deadly epidemic. Alice Young became the first person to hang for witchcraft in the American colonies on May 26th, 1647. I was shocked and outraged never having heard of Alice or her plight that took place forty-five years before the Salem trials even began—the spark that started all of them!

6. I needed to know more about what happened to Alice. To be content with the few long-held assumptions about her did no justice to her suffering. I embarked on a years-long effort to research old historical records that no historian had ever bothered to look at fully such as Windsor land records. What I discovered evolved into a remarkable story that had never been told.

7. Had it not been for Alice Young, I may never have started down the path to be an author. Until that point in time, I merely mused about writing historical novels in a distant and nebulous future. Initially too shy and nervous to take on professional writing for the public, I remained private about my dream to write. But Alice and those who loved her beckoned me and would not let go. She demanded a concrete project to raise awareness about her death. To this day, I still do not know if the voices I heard during this process were my own or if they were from those spirits who witnessed Alice’s persecution so long ago. In any case, they brought Alice’s story to light and I knew there was no escape in telling it. I was compelled to do it for Alice Young and all of her generations of descendants. I’m so glad I did. One of Windsor: The Untold Story of America’s First Witch Hanging was published in October of 2015. It continues to raise awareness about the lesser-known Connecticut Witch Trials.

8. With One of Windsor, I’d learned a lot about historical research and genealogy as well as the profession of writing. The experience spurred me on to explore telling the story of another little-known female troublemaker in early colonial America, tavern keeper Marie du Trieux, who lived in the colony of New Netherland. I discovered her in my husband’s family tree. At the same time, I wanted to explore what happened to one of the main characters in One of Windsor after Alice Young’s death and the trajectory of the Connecticut Witch Trials culminating in the Hartford Witch Panic.

9. With both research from genealogy and history not used in One of Windsor, I was able to create a story about both Marie du Trieux and a contemporary counterpart in New England, trader John Tinker, the devastated cousin of Alice Young. Their stories started out separately but there was plenty of opportunity to merge them. The cover of The Salty Rose shows the exact moment when they meet each other outside of Marie’s tavern in New Amsterdam. I was fascinated to learn about so many astonishing pieces of early American history and how they came together in researching and writing for this novel. The result was The Salty Rose: Alchemists, Witches & A Tapper in New Amsterdam. It was released in September of 2019 and received the 2020 Genre award from the Independent Publishers of New England. I am so pleased and grateful to share more about it with this blog.

10. As any writer does, I am honing my skills and growing more deeply into this role as time goes on. I am still in the process of fully becoming an author. My current work in progress is the legend of a family kidnapping that took place among Sicilian immigrants in the early twentieth century. I’m also interested in exploring writing in other genres and currently have an outline for a ghost story. 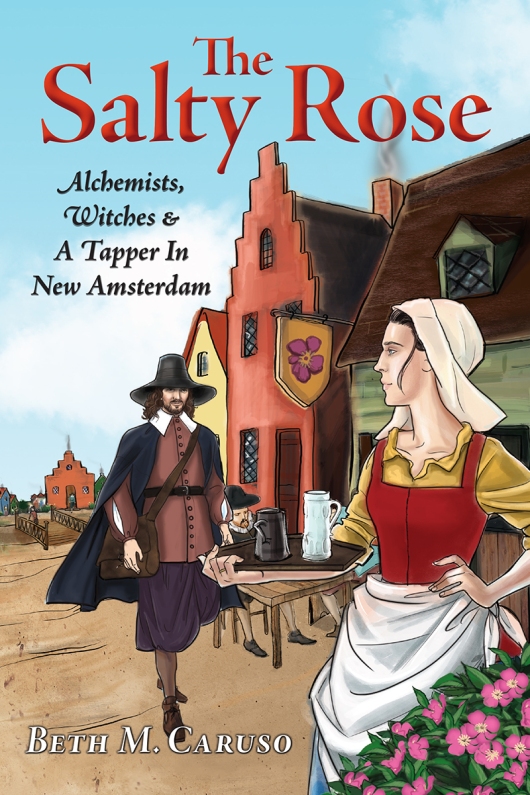 Marie du Trieux, a tavern keeper with a salty tongue and a heart of gold, struggles as she navigates love and loss, Native wars, and possible banishment by authorities in the unruly trading port of New Amsterdam, an outpost of the Dutch West India Company.

In New England, John Tinker, merchant and assistant to a renowned alchemist and eventual leader of Connecticut Colony, must come to terms with a family tragedy of dark proportions, all the while supporting his mentor’s secret quest to find the Northwest Passage, a desired trading route purported to mystically unite the East with the West.

As the lives of Marie and John become intertwined through friendship and trade, a search for justice of a Dutch woman accused of witchcraft in Hartford puts them on a collision course affecting not only their own destinies but also the fate of colonial America.

The Director General slammed the gavel down with the harsh thud of an ending.

“Marie du Trieux, you are hereby banished from New Netherland forever!” he said.

As I held on to the railing of a departing schooner, I remembered the jarring finality of those stark words against me. Looking back one last time at my town, a little place in the wilderness that had grown up with me—I longed to stay in the home where I gave birth to all my children, the location of my loves and of my losses.

This is the best place to begin recounting the story of how I played a part in the transition from Dutch New Amsterdam to English New York, my dear granddaughter.

I suppose the English will have their own tales to tell about the events that transpired but I want you to know my personal and secret version of the history of my beloved city before I am gone.

Having left New Amsterdam for the first time on that cold winter day in 1664, I felt unsettled, not quite believing that the time for my departure had finally come. Where had the time gone? How quickly had it passed? It had been nearly forty years since I first set foot on the shores of Manhattan with my mother, father, and little brother.

The view from our vessel, The Morning Star, was unrecognizable from the one my family saw many decades earlier. We had arrived to nothing but marsh, forest, and a few Indian canoes that approached our ship in greeting and curiosity. It’s easy to recall my excitement as a young girl of flowing dark hair seeing the Natives for the first time when we reached these shores many years ago.

But at the point of my expulsion, I wasn’t an adventurous, naïve child anymore. A mature and defiant woman who had faced her share of hardship and disappointment had taken her place. The Council of New Netherland and Director General Stuyvesant had told me they were finished with my repeated offenses and had given the order for banishment. I’d been in trouble with the authorities far too often they said. They’d insisted that my tavern be closed.

“So this is how it must end,” I uttered in disbelief to my son Pierre, your uncle, as we huddled together on deck. 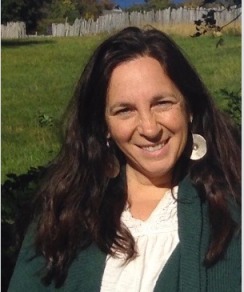 Award-winning author, Beth M. Caruso, is passionate to discover and convey important and interesting stories of women from earlier times. She recently won the literary prize in Genre Fiction (2020) from IPNE (Independent Publishers of New England) for her most recent novel The Salty Rose: Alchemists, Witches & A Tapper In New Amsterdam (2019). The Salty Rose is Beth’s second historical novel and explores alchemy in early colonial times, an insider’s view of the takeover of the Dutch colony of New Netherland, and the Hartford Witch Panic with information she gathered from previous and ongoing research. Beth’s first historical novel is One of Windsor: The Untold Story of America’s First Witch Hanging (2015), a novel that tells the tale of Alice ‘Alse’ Young and the beginnings of the colonial witch trials. She based the story on original research she did by exploring early primary sources such as early Windsor land records, vital statistics, and other documents. She lives in Connecticut with her family. Beth kayaks and gardens to unwind.

Beth M. Caruso will be awarding a $25 Amazon or Barnes & Noble gift card to a randomly drawn winner via Rafflecopter during the tour. Find out more here.

Follow Beth on the rest of her Goddess Fish tour here.