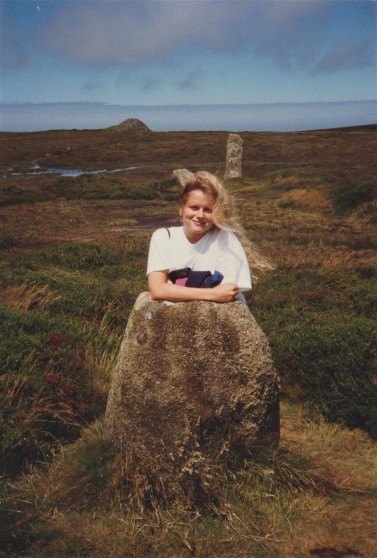 1. His mother was American, and his father was an English concert pianist.
2. His parents died in a car crash on his 19th birthday.
3. He was a classically trained pianist and originally intended to follow in his father’s footsteps.
4. He got his PhD in history from the University of Chicago, specializing in medieval studies.
5. He has perfect pitch.
6. He can read and speak two dead languages: Anglo-Saxon and Anglo-Norman.
7. He makes a mean grilled cheese.
8. He has a “magical” ability: if he touches a person, he instantly knows what he/she needs.
9. He loves reading mysteries, especially those by Sir Arthur Conan Doyle and Dennis Wheatley.
10. When he retires from teaching history, he’d like to write fiction.

1. Her mother died at her birth because of the Ravenwood curse.
2. She also lives under the curse: unless a Ravenwood heir is conceived in love, the mother dies in childbirth.
3. Like Griffin, she has perfect pitch.
4. She has a lovely singing voice.
5. She enjoys gardening and skillfully makes medicines to treat Ravenwood’s people.
6. Although she’s beautiful, she sees herself as unattractive to men.
7. She has an ear for languages.
8. Her spirit leaves her body when she sleeps, allowing her to travel to different times and places, visit with deceased loved ones, and glean important knowledge.
9. She loves ravens.
10. She excels at keeping secrets. 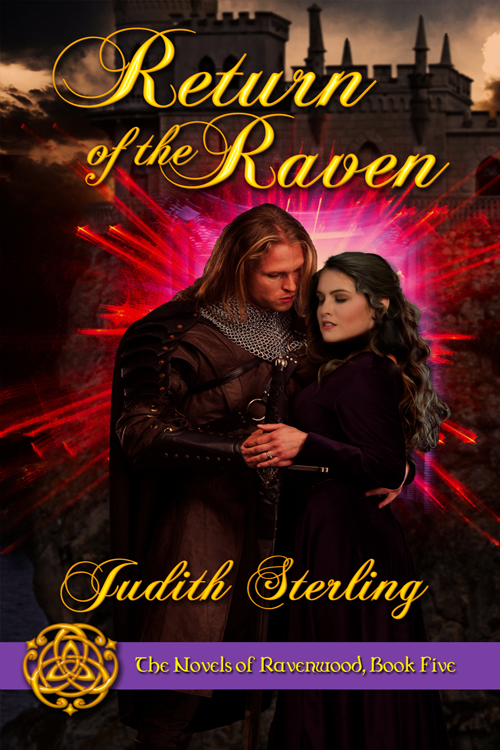 Margaret, Lady Ravenwood, is trapped in a loveless marriage and firmly entrenched in the medieval world. Along comes Griffin Nightshade, a historian from the future whose soul resonates with hers. He persuades her to return with him to the 1950s, but heeding her heart means courting danger from a curse that could spell her doom.

Haunted by his parents’ sudden deaths, Griffin knows all too well the pain born of love lost. He guards his emotions, but Margaret delves deep and goes straight to the soul. She’s hard to resist…and harder to set free.

Dressed in blue-striped pajamas, Griffin stood in front of his bed. His gaze shifted back and forth between two books. Usually, he was a decisive reader, but tonight was different. He’d had Margaret on the mind the entire time he perused the library shelves, and even now, the sound of her bathwater filling the tub next door plagued his focus.

Nevertheless, he’d narrowed the choice to two books: Sir Arthur Conan Doyle’s The Hound of the Baskervilles or Dennis Wheatley’s The Devil Rides Out. He’d read both before and enjoyed them immensely, so he couldn’t go wrong with either one.

So what’s it going to be? Murder on the moors or black magic on Salisbury Plain?

Margaret’s clear-toned voice penetrated the wall between their bedrooms. She was humming the first part of the sonata he’d played tonight. Not only did she have an ear for language; she also had one for music. She had perfect pitch, too, as did he, which allowed him to discern that she hummed the exact same notes he’d played on the Steinway. Her singing voice was just as lovely as he’d imagined it might be.

His brow furrowed. He had no business imagining anything about her, least of all her naked body slipping into a warm bath and—
Stop! He huffed and rubbed his mouth with his hand. Then he refocused his attention on the books for the umpteenth time. Come on now. Murder or magic? Magic or murder?

“Griff!” A note of panic tinged her voice.

He dashed into the hall and into her bedroom, then flung open the bathroom door. She stood in the bathtub, clad in bubbles whose brethren spilled over the side of the tub onto the floor. Luckily, the white foam covered all but her neck, head, and one shoulder.

“There’s too much of it.” She gestured to the mess and sent a cluster of bubbles flying through the air.

“No, just unnerved. They kept building and building until I feared they might cover the entire chamber.”

“First, let’s turn off the water.” He reached into the sea of foam, found the faucets, and twisted each one in turn. “How much of the soapy liquid did you use?”

“The whole bottle.”
His eyes widened. “Well, that explains it. Only a small amount is necessary.”

“When Hannah showed me how to use it, she simply turned the bottle upside down to demonstrate pouring. I assumed all of the liquid was needed.” With a rueful expression, she looked around her. “Obviously not.”

She was adorable. And underneath those bubbles, she was nude. Time to go!

“Well, I’m glad ʼtwas nothing serious. I’ll just be going now.” With an about face, he headed for the door.

Uh oh. What does she want now? He turned back around.

“I must know something, and you’re the only one who can help me know it.”

A warning bell pealed in his mind and urged his heart to quicken its pace. “What do you want to know?”

“Earlier, you called me attractive, but you haven’t seen all of me.”

Only by the grace of those bubbles! Did she intend to bare all? No…modesty would prevent that. But the look in her eye—that steady gleam of determination—made him nervous. “Surely you don’t mean—”

“I do. All of my married life, Evoric has mocked me and deemed me unappealing.”

“To him mayhap.” Or eunuchs. Otherwise…
Adamantly, she shook her head. “To all men. Or so he says.”

He is such a sleaze. “He’s just trying to make excuses for his own failure.”

“That may be, but I’ll never know for certain unless you look upon me yourself and give me your honest opinion.”

Dear God. How did I get myself into this mess? “I really think ʼtis better if—”

“Griff.” Her violet eyes pleaded with him. “I know I’ve asked a lot from you, but I need this. Otherwise, I’ll wonder about it the rest of my life.”

How could he deny her the chance to rebuild her self-confidence? He took a deep breath, pushed it out, and braced for what would come. “Very well. Show yourself to me.”

Judith Sterling is an award-winning author whose love of history and passion for the paranormal infuse everything she writes. Whether penning medieval romance (The Novels of Ravenwood) or young adult paranormal fantasy (the Guardians of Erin series), her favorite themes include true love, destiny, time travel, healing, redemption, and finding the hidden magic which exists all around us. She loves to share that magic with readers and whisk them far away from their troubles, particularly to locations in the British Isles.

Her nonfiction books, written under Judith Marshall, have been translated into multiple languages. She has an MA in linguistics and a BA in history, with a minor in British Studies. Born in that sauna called Florida, she craved cooler climes, and once the travel bug bit, she lived in England, Scotland, Sweden, Wisconsin, Virginia, and on the island of Nantucket. She currently lives in Salem, Massachusetts with her husband and their identical twin sons.

6 responses to “Spotlight on Return of the Raven”