If you are of dating age or married, I wrote this book for you.

This is not a self-help or a how-to book. This is the story of the metamorphosis of a timid, fear filled child who finally blossomed into a warrior. I have many scars that no one can see, but they are healed now. Through these battles to become a warrior, I have helped the wounded souls that have come to me and seen them overcome their demons to stand tall and proud of who they are. It has brought me great joy.

Through the years, I have heard along the way that the ancient Chinese would fix their broken china cups or figurines with gold to make them whole again, and more valuable. I believe that humans can be repaired with love and a sense of self-worth. Each and every one of us are here for a purpose and we are given gifts to help fulfill our purpose.

I would love for you to come on this journey with me.

My stepdad was a newspaper man, then the editor of Truck Transportation magazine. He then went on to work in the public relations department at Bell Canada. He received many awards for his films and articles about Bell.

There were still fights and I got to know when they would arrive home from the press club. I would always wake a half hour before they arrived, no matter what the time was, and I would start to sweat in fear of what was coming. By now, I was getting hauled out of bed to take sides. God, what a mess. I told them if the fighting didn’t stop, I was leaving. That helped for a while.

I met a man named John and we began dating. He was tall and handsome, but what I liked the most was that he was stable. His “yes” was yes, and his “no” was no. He would be my pillar and I could count on him to take a stand with me against my mother. Or so I thought.

He had asked me if he could borrow my car for a week. Even though I was twenty years old, I still felt I had to ask my mother. She said yes. I told my boyfriend that he could have my car for the week. Then, a few days before he came to pick it up, Mom decided he could not have the car. I reminded her that she had said yes and I told him yes, and that I was not going back on my word. Mom would do this all the time, say yes and then say no. It kept me off balance. I, on the other hand, believed you should always keep your word. We had a big fight over this. I told her I was twenty years old and I thought it was about time I had a say over my own life. It didn’t matter how much she argued with me, I stood firm. My boyfriend had the car for the week. His car was in the shop and I was not going to leave him high and dry.

It probably scared her that she was losing control over me. Then—poof!—she told me my father wanted to see me. I am not always the brightest bulb on the Christmas tree, because it didn’t hit me until later that she had phoned him and asked him to back her up—that I should still do as I was told. I couldn’t believe that, all along, she’d known where he was and she had purposely kept me away from him. I could have had my father for most of my growing-up years. He was back home from England and had been in Ottawa for years. Still, she’d kept me from him. I would often ask her what he was like; she never badmouthed him, but she made the idea of him sound so final that I wouldn’t ask after him again for a long time. 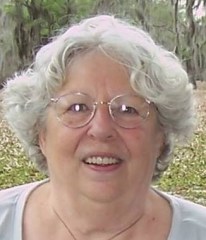 Donna G. Bourgeois enjoys writing and painting, both excellent activities to soothe the soul. She went to university at 65-years-old and earned an associate degree in theology, just to keep the grey matter healthy. She considers her greatest quality to be the ability to love greatly and be kind to those who life have put on her path. Life with Ollie is her first book, although she has many more story ideas waiting in the wings. She believes if you listen to your inner voice, you will find your bliss.

Donna Bourgeois will be awarding a $20 Amazon or Barnes & Noble gift card to a randomly drawn winner via Rafflecopter during the tour. Find out more here.

Follow Donna on the rest of her Goddess Fish tour here.

6 responses to “Spotlight on Life with Ollie”