I’ve just turned 65. And in a few weeks, when I retire from my job, I’m looking forward to finally being a full-time writer, instead of juggling 12-hour workdays with my lifelong creative passion. I’ve got a clever countdown app on my phone that displays the months, weeks, days, minutes and seconds to that glorious moment. I am sooo ready for this massive change in my life!

But it’s not the only change I’ve been dealing with recently!

Two years ago I was encouraged to switch to a different writing genre by a very kind agent in New York, and also by my alpha reader, Brian, in England. Brian suggested that I think about having Jason Davey, my main character from Cold Play, as the hero of my next story.

The last time we’d seen Jason, he was a musician aboard a cruise ship in Alaska. What if he came ashore and got a gig playing guitar at a jazz club in London? What if he was now into solving mysteries?

I loved the idea. Jason Davey, professional guitarist and amateur sleuth, is asked to track down a missing musician, and all of the clues lead to northern Canada. The result was Disturbing the Peace, a novella that I published at the end of 2017.

Then, last year, I wrote Notes on a Missing G-String, a full-length novel in which Jason’s asked to investigate the theft of £10,000 from a dancer’s locker at a Soho gentlemen’s club. He initially considers the case unsolvable. But the victim, Holly Medford, owes a lot of money to London crime boss Arthur Braskey and, fearing for her life, has gone into hiding at a posh London hotel. 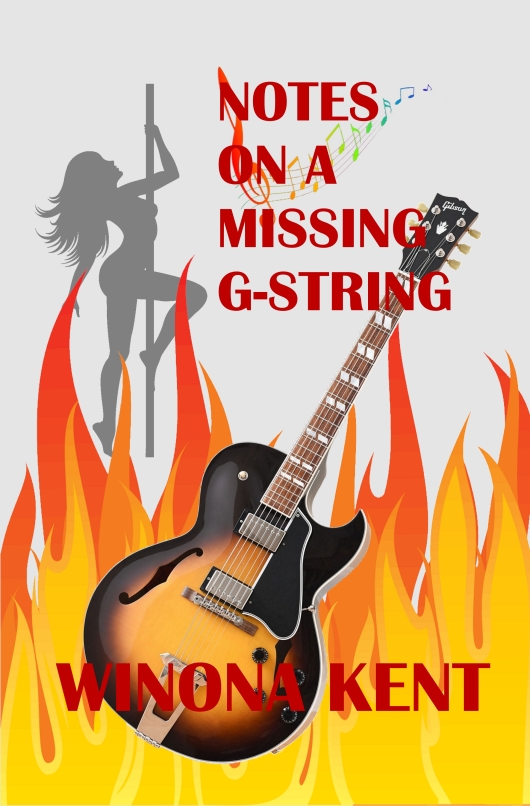 Jason’s investigation takes him from Cha-Cha’s and Satin & Silk (two Soho lapdancing clubs) to Moonlight Desires (an agency featuring high class escorts) and finally to a charity firewalking event, where he comes face to face with Braskey and discovers not everything Holly’s been telling him is the complete truth.

As he becomes increasingly drawn into the seamy underside of Soho, Jason tries to save Gracie, his band-mate’s 14-year-old runaway daughter, from Holly’s brother Radu, a ruthless pimp, while at the same time protecting Holly herself from a vengeful Braskey—nearly losing his life, and Gracie’s—in the process.

The outline for the novel literally burst out of me – and it provided enough of a boost to my confidence that I decided to tackle something else – losing weight.

I’m a Type 2 diabetic – I was diagnosed in 2009, around the same time that I was hitting menopause. My version of the disease turned out to be particularly aggressive and within a couple of years I was on four different diabetes meds, including 55 units of insulin nightly.

Unfortunately, one of the side effects of insulin is weight gain, which works against you when prevailing medical knowledge suggests that if you modify your lifestyle, get regular exercise, adjust your eating habits and, most importantly, lose some weight, you’ll go a long way towards improving your blood glucose levels and, in some cases, partially or fully reversing your diabetes.

By the time I asked my endocrinologist for a referral to a medically-supervised weight loss program, I was about 80 pounds overweight. I was referred to the Medical Weight Management Program in Coquitlam, BC. The program considers the full impact your excess weight has on your health, your psychological well being and your mobility and involves intensive lifestyle modification where the bulk of the visits take the form of in-person group interactive medical visits. The main philosophy is that your best weight is the weight you can realistically and healthfully sustain and be comfortable with.

I’ve been with the MWM program for a year and a half now and I’ve lost 34 pounds. I’m still dropping. It’s a slow process, but it’s meant to be. The lifestyle changes I’m working on are meant to be lifelong and permanent.

I faithfully use a food journal. I never feel deprived – for instance, I haven’t given up chocolate at all. I’ve learned to treat myself and to be aware of how much of that treat I’m having.

I’ve learned some other great tricks – for instance I adore the savoury scones at JJ Bean but one entire scone is worth more than 400 calories. So I buy three at a time and take them home and chop them into quarters and freeze them. Then I have one of those quarters as part of my afternoon snack every day. Yes, it takes a certain amount of willpower. But if you know you’re going to have a tasty treat at 3pm every afternoon, it’s a lot easier to tell yourself that you don’t have to eat the entire thing right now.

I’ve learned to plan in advance. I have breakfast at home but I take three small meals to work with me every day: a morning snack, lunch, and an afternoon snack. The snacks include things like cubed cheese, spicy roasted chickpeas, exotic Japanese and Chinese pickles, chopped celery, sliced orange peppers, wasabe peas…anything that satisfies that need for something tasty and satisfying to put into my mouth. I weigh it all out and stick to my eating plan.

And I’ve learned to be a “mindful” eater. My food used to disappear so quickly I didn’t even realize I‘d eaten it. Now, I stop to actually taste and enjoy what I’m putting in my mouth instead of mindlessly chucking it down.

Aside from being 34 pounds lighter – which has had a positive influence on nearly everything in my life, from dropping a couple of clothing sizes to just feeling better physically and having more energy – I’ve managed to reduce my nightly insulin dose to just 5 units. The plan is that, after I’ve lost a few more pounds, I should be able to stop using it altogether.

I love my newfound hero, Jason Davey, and I can’t wait to see how Notes on a Missing G-String is received.

I read this book in two sittings and had trouble putting it down. Ms. Kent has a way of drawing me into her stories and keeping me hooked until the end. It helps to have an intriguing protagonist like Jason Davey, who has a knack for stumbling into high-stakes crime scenarios. Like the first installment—Disturbing the Peace—Notes on a Missing G-String is a fast-paced novel filled with plot twists, exotic and ruthless characters, a teenage runaway, and a love child…all set against the seamy underside of Soho.

Where to find Winona

2 responses to “Weighing In”