Writing a synopsis is probably the hardest thing many writers face. I’ve sold a lot of books just using a well-written synopsis. I sold Tell-Tale Publishing the Vagrant Chronicles, a three-book series, with a synopsis. There’s nothing as satisfying as selling a book you have yet to write. I’m so spoiled, I hate writing a book I haven’t sold. So, here’s the recipe I follow. It’s simple and it works.

I set my synopsis up with characters first. I list each character. I give them goals, backstory and motivation. It’s important to explain how they interact with each other and what their role encompasses in the book.

For the third book in the Vagrant Chronicles, Descendent, the character layout looked like this.

Logan Hall: Logan led the rescue of his girlfriend and friend from prison on the moon. Logan’s role in Mutant is to lead a party back to Earth to save the Vagrants of New LA who are being eliminated by a new threat, a mutant Vagrant named Tegu who has allied himself with New LA’s new director Humphrey Coleman. Logan’s goal is to return to Gliese where Shayna is waiting.

Eddie Chou: Eddie was part of the Vagrant resistance before he went on the raid to the moon to rescue Logan’s two friends. His part of a greater plan to free Earth was dumping a Sopore cleansing drug developed by Professor Goswami into huge holding tanks on the moon containing melted space ice. This water was transported back to Earth and supplied a large portion of the water for new Washington. In Mutant, Eddie will be the leading agent in a mission back to Earth. Eddie’s technical genius will be critical to the mission.

Shayna Nagata: Shayna is Logan’s girlfriend. She grew up feeling like an outcast because she was allergic to corn so she was never addicted to sopore. Shayna stays behind on Gliese to help Declan’s woman and her daughter take care of the rest of the new colony. She loves Logan and their separation is very painful.

Enoch Loughlin or Knock: Knock helped in the escape from the moon. He forms a relationship with one of the girls in Declan Hall’s colony and joins in the trip back to Earth.

Fenfang: The daughter of Declan’s woman Mai Li. Fenfang has studied all martial arts under the tutelage of Declan. She knows all weapons especially knives and swords and is an expert in Jujitsu and Karate. She accompanies Knock on the rescue mission to New LA and is an integral part of the success of this mission using her skills to help defeat Tegu and his band of rogue Vagrants. She and Knock fall in love.

Rajan Kumaran: Professor Goswami’s nephew. He was captured in Book I and rescued from prison on the moon where he was scheduled to be sent to a mining camp. Raj has to stay behind on Gliese when the rescue mission leaves because he is too young.

Professor Depak Goswami: The professor is also a doctor taking care of Vagrants in New Washington. He was also heavily involved in a growing resistance and in an alliance with Eddie Chou to clean the water of new Washington by placing a sopore cleansing agent in the water supplies on the moon. When Eddie contacts him from Gliese, he tells him of the growing trouble in New LA and the threat from mutant Dr. Drey to the efforts of the New LA Vagrants to escape Earth by building a spaceship.

Once you have all your characters treated like this as completely as you can, and I mean every character who has some bearing or impact on your story, outline your story. Make sure you hit all the major turning points.

Once you’ve outlined your story, you must include the ending. No editor or agent will be interested in your book if you don’t tell them how it’s going to end. Don’t tease or be cute, just write the ending.

Make sure you include in this ending how you resolved your characters’ conflicts, explain what your characters learned and how they changed and grew throughout the story.

This is how I write a synopsis. Using this method helps you give anyone you’re trying to sell your story to, a much clearer picture of how your story works. It’s all about the characters. They are the ones who move your story, and if your clearly explain who they are and what they will be doing in your story, it makes writing the story outline much easier.

Finally, an all-inclusive book on young adult fiction must-do, don’t do and how-to. If you want to write a young adult novel, you need to read this book first. Coauthored by an award-winning YA author and an acquisitions editor, both experts on kids and what they like to read, this encyclopedia contains all you need to start or improve a career as a YA fiction author.

From an examination of the market, genre and its sub-genres, to mechanics and the business, everything is at your fingertips. This amazing writer’s resource is written in a relaxed and interesting style, with plenty of contemporary references and examples for clear understanding and easier application.

Most writing classes for Young Adult fiction and Middle Grade tell you the duty of your book’s opening is to hook your reader and to catch the interest of an agent. The truth is, that’s only one of the purposes of your opening. Too often we forget that, as Frank Herbert said in Dune, “A beginning is a very delicate time.”

When writing for young adults, you should know where you’re going, just as when you write adult fiction. Plot construction for stories with universal themes is the same in any genre. There is a plan, a plot, a diagram you can follow to create a satisfying read. Just as with painting, every artist who uses the same subject will create a different and unique work of art. So, using a basic outline to be sure you write a story that resonates to the inner psyche of readers is not a bad idea.

Some may argue that modern stories can’t demonstrate enough diversity when trying to fit the entire world into a single format such as The Hero’s Journey, but iconic success stories like Star Wars, The Lord of the Rings, the Harry Potter stories and more don’t seem to mind. They’re hardly the same stories, are they? Do they seem like boring knockoffs to you? Millions of fans and dollars later…they are still growing their fan base. Lucas even spoke of Star Wars and the incorporation of Joseph Campbell’s Hero’s Journey and appeared in his Bill Moyer’s series.

Daughter of a Colonel, Janet Schrader-Post lived the military life until she got out of high school. She lived in Hawaii and worked as a polo groom for fifteen years, then moved to Florida where she became a reporter. For ten years she covered kids in high school and middle school. Kids as athletes, kids doing amazing things no matter how hard their circumstances. It impressed her, and it awed her. “How wonderful teens are. They have spirit and courage in the face of the roughest time of their lives. High school is a war zone. Between dodging bullies, school work and after school activities, teens nowadays have a lot on their plate. I wrote stories about them and I photographed them. My goal was to see every kid in their local newspaper before they graduated.”

Janet love kids and horses, and she paints and writes. Now she lives in the swampland of Florida with too many dogs and her fifteen-year-old granddaughter. She started to write young adult fiction with the help of her son, Gabe Thompson, who teaches middle school. Together they have written a number of award-winning YA novels in both science fiction and fantasy. 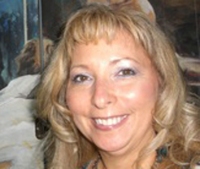 Elizabeth Fortin-Hinds knows kids well. She spent decades teaching teens and adults to write and improve their reading skills. As a literacy expert and certified coach, she helped both teachers from elementary to secondary and preservice graduate students learn to improve reading and writing instruction. She has taught at both the secondary and graduate level, everything from rhetoric, essays, and thesis statements, to poetry, short stories, and how to write a novel. She has learned to use both sides of her brain simultaneously, but enjoys the creative side the most, learning to play piano, draw and paint, and find time for her own writing since retiring from her “day” jobs.

A “true believer” in Joseph Campbell’s The Hero with a Thousand Faces, mythic structures, she uses that lens when considering manuscripts for Tell-Tale Publishing Group, a company she founded with some friends from her critique group a decade ago.

We are a small press, a traditional publishing company bringing you the best in E-books, print and audio books to feed your body, mind and spirit. Our cutting-edge fiction includes old favorites and edgy speculative fiction for today’s eclectic readers. Our stories will grab your attention and take you on a fast, exciting ride that will leave you breathless. WW, our affiliate, publishes select literature under our Cosmos Imprint and nonfiction titles under our Ivy Tower Imprint. http://www.wisewordspublishing.com

Founded in 2009, in Michigan’s Lower Peninsula. Our company motto of “excellence in creative entertainment and learning, ” informs our artwork, manuscript selection, editing and publishing. http://www.tell-talepublishing.com

The authors will be awarding a $25 Amazon or Barnes & Noble gift card to a randomly drawn winner via Rafflecopter during the tour. Find out more here.

Follow Elizabeth and Janet on the rest of their Goddess Fish tour. The tour dates can be found here.

16 responses to “Recipe for a Successful Synopsis”