I’m happy to welcome Canadian author Winona Kent to the Power of 10 series. Today, Winona shares ten interesting facts about the protagonist of her latest release, Disturbing the Peace.

I first wrote about Jason five years ago in my novel Cold Play, which took place on board an aging cruise ship sailing from Vancouver to Alaska. Jason was one of the ship’s entertainers; he spent his evenings in the TopDeck Lounge singing, playing his guitar and observing his audience, several of whom ended up having rather more to do with Jason than merely sharing his voyage north.

Jason left the sea after Cold Play and after some adventures in Australia and Hong Kong, ended up back in London gigging at The Blue Devil, a jazz club in Soho.

In my new novella, Disturbing the Peace, Jason discovers he has some excellent investigative skills, and ends up in northern Canada attempting to find out what happened to a legendary musician who’s been missing for four years.

When I wrote Disturbing the Peace, I wanted to make sure I could actually handle a true mystery. I’ve been writing gentle time travel stories for the past couple of years, and I felt a complete change would be good for my creative soul. I ended up falling in love with Jason all over again. The result: I’m going to give him more adventures, full-length novels that fall squarely within the mystery genre. The next one is tentatively titled A Diminished Seventh, although I’m toying with renaming it Notes on a Missing G-String. I hope to have it finished by the end of 2018.

Here, then, are ten things you might not know about Jason Davey…

1. His real name is Jason David Figgis. His parents, Mandy Green and Tony Figgis, formed the folk-pop group Figgis Green in the early 1960s. Although he could trade on his parents’ fame, he doesn’t. He hates nepotism and would rather be recognized as a musician in his own right. In fact, very few people in the business in London know about Jason’s musical pedigree, and he wants to keep it that way. As a result, he sometimes finds himself struggling for recognition.

2. Jason’s a smoker. He gave it up for a few years after his wife, Emma, died, but picked it up again after he left the sea. He also gave up drinking – and that’s lasted. His favourite non-alcoholic concoction aboard the Star Sapphire was a hand-made melon-juice concoction supplied by Samuel, the bartender in the TopDeck Lounge. His favourite non-alcoholic drink now is a spicy tomato juice he creates himself from tinned crushed tomatoes, vinegar, sea salt, stevia, Worcestershire sauce, lemon juice, garlic powder, onion powder, minced onions and horseradish. The drink doesn’t show up in Disturbing the Peace but I’m going to introduce it in the next story. It’s my favourite drink too – I make it in bulk every couple of days and keep it in a jug in the fridge.

3. Jason has four guitars, which he keeps in a locked room at The Blue Devil: two solid body Fenders (a Tele and a Strat), a handsome black Phoenix hollow-body similar to the one Brian Setzer plays, and a Gibson ES-175, an archtop that’s a favourite of traditionalists, although he finds it uncomfortable because of an injury he sustained on board the Sapphire. He had six different guitars when he was gigging at sea, including an original Fender Strat that once belonged to his dad. You’ll have to read Cold Play to find out what happened to them.

4. Jason believes in ghosts and guardian angels, and intuitive and psychic powers. He had a guardian angel named Jilly in Cold Play, although he spent much of the novel assuming she was just one of his Twitter followers. She ending up proving she was much, much more than that. I suspect Jilly may put in a return appearance in future stories. She could definitely have helped him out in Disturbing the Peace.

5. Jason was married to a makeup artist named Emma. He has a son, Dominic, who’s now at university studying film production. Emma died in a fire which Jason believed he caused and the guilt he felt was what originally drove him to run away to sea. In Cold Play he met and fell in love with a travel agent named Katey Shawcross. Some years have passed, but he’s still on very friendly terms with Katey – and, indeed, we meet her again in Disturbing the Peace, where she proves to be very useful.

6. Jason’s favourite restaurant is Rules, in Covent Garden. He’s well-known there. His favourite dish is the Steak and Kidney Pie, although he has been known to order Wild Boar Pie, much to Katey’s disgust.

7. Jason’s a frustrated actor at heart. He loves situations where he can play at being someone he’s not. In Disturbing the Peace, he harnesses his acting skills to impersonate an accountant. Not the most exciting of roles – but it excites him, because it allows him access to information he might not otherwise have been privy to.

8. I love looking in peoples’ fridges to see what they keep there. Jason’s little fridge in his crew cabin on board the Sapphire contained the following: eleven G&B chocolate bars in assorted flavours, two jugs of fresh melon juice (see above), four bottles of Starbucks Mocha Frappucino, a four-day-old tray of take-out sushi from Ketchikan, a package of Brie, a package of Kerrygold Dubliner and a box of artisan whole leaf teabags (assorted varieties, many from obscure places in Africa). In Disturbing the Peace, Jason calls a tiny flat in a converted Georgian townhouse on Pentonville Road home. I didn’t have time to explore what was in his fridge there, but I promise in the next story, I’ll investigate! I suspect these days he’ll still have different cheeses and packets of pate from Waitrose. And a bread maker on his kitchen counter.

9. In Cold Play, Jason was a Twitter addict. His Twittername was @Cold_Fingers. I have yet to find out if he’s still driven by social networking. I suspect if he’s in touch with any of his old Twitterfriends, they’ve probably now all migrated over to Instagram or Facebook. Hopefully none of them include SaylerGurl, his Twitterstalker who had a fondness for sending him obsessive love notes featuring dreadful poetry.

10. Jason loves watching films on Netflix. His favourite is Mission: Impossible – he loves how they use their skills to solve problems. His favourite music these days is jazz, of course, but he’ll always have a fondness for Cliff Richard’s old backing group, The Shadows, and Hank Marvin particular. He absolutely loves Hank’s more recent Gypsy Jazz tunes. 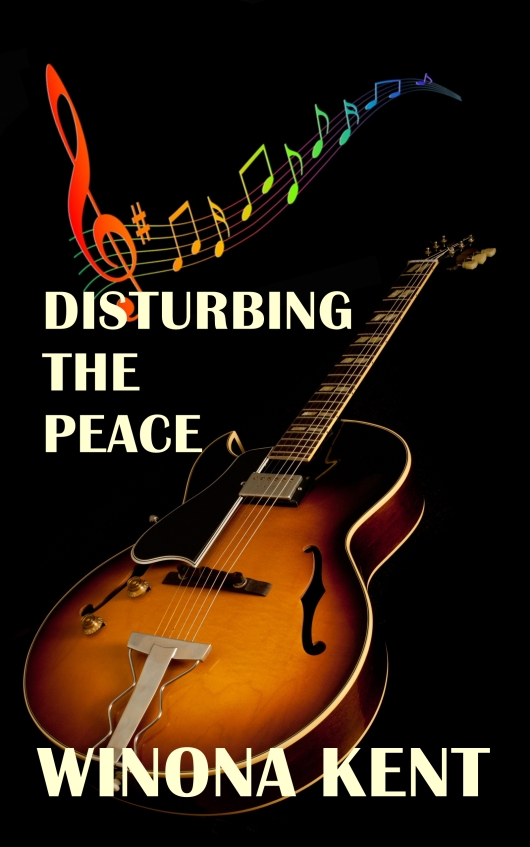 Jason’s last job was aboard the Star Sapphire as she sailed from Vancouver to Alaska. Now he’s back on shore, and he has a regular gig at The Blue Devil jazz club in London.

When Dominic, Jason’s film-student son, asks his dad to help track down a missing musician for a documentary he’s making, Jason leaps at the chance.

Ben Quigley played rhythm guitar in Jason’s parents’ pop-folk group Figgis Green in the late 1960s. And, after living a life that in many ways paralleled Gerry Rafferty’s, he dropped off the face of the earth four years ago.

Jason’s search ultimately takes him to Peace River, Alberta – 300 miles from Edmonton in Canada’s frozen north. And what he discovers there is both intriguing – and disturbing.

Winona Kent was born in London, England. She immigrated to Canada with her parents at age 3, and grew up in Regina, Saskatchewan, where she received her BA in English from the University of Regina. After settling in Vancouver, she graduated from UBC with an MFA in Creative Writing. More recently, she received her diploma in Writing for Screen and TV from Vancouver Film School.

Winona has been a temporary secretary, a travel agent and the Managing Editor of a literary magazine. Her writing breakthrough came many years ago when she won First Prize in the Flare Magazine Fiction Contest with her short story about an all-night radio newsman, Tower of Power. More short stories followed, and then novels: Skywatcher, The Cilla Rose Affair, Cold Play, Persistence of Memory and In Loving Memory.

Winona’s sixth novel, Marianne’s Memory, will be published in 2018, along with a new Jason Davey mystery. tentatively titled A Diminished Seventh.

Winona currently lives in Vancouver and works as a Graduate Program Assistant at the University of British Columbia.

Please visit Winona’s website at http://www.winonakent.com for more information about her writing.

She’s also written a blog about the inspiration behind Disturbing the Peace: https://winonakent.wordpress.com/2017/12/11/disturbing-the-peace

When I heard that Ms. Kent was planning to explore another genre, I was curious to see if she could successfully transfer her well-honed writing skills. I needn’t have worried. In Disturbing the Peace, she demonstrates ample proof of her wonderful eye for detail and gift for creating a strong sense of place. Riveted from the start, I found myself immersed in Jason Davey’s journey as he traveled from London, England to Peace River, Alberta. I strongly recommend setting aside an afternoon or evening to read this well-plotted, character-driven novella.