Chrys Fey here. I am taking over Joanne’s blog to discuss heroes. Who doesn’t love a good hero? I sure do! And when I write or read, I prefer strong heroes. You know, those heroes that could literally sweep you off your feet. If that’s not enough to sell you on the merits of a strong hero, I’ve got more.

10 Reasons Why I Love Heroes with Titles

1. They are sexy!
2. Their jobs are fascinating. (Police officers, firefighters, soldiers, etc.)
3. They dedicate their lives to saving others.
4. They will do anything to protect those they love.
5. They are tough but can still be romantic.
6. Many of their scenes are exciting.
7. They can be hardheaded which makes for fun confrontations.
8. They make female readers swoon when they are intimate.
9. Their dialogue is entertaining because they can curse up a storm.
10. And they pair well with my strong heroines.

Detective Reid Sanders doesn’t believe in the supernatural, but when he’s faced with a crime scene that defies the laws of nature, he has no other choice but to start believing. And solving a magical murder involves working with a witch.

Liberty Sawyer embodies the look of your classic evil witch, so, it’s no surprise when she uncovers the murderer is a witch that she becomes Reid’s number one suspect. If she can’t convince him otherwise, more people could lose their lives to dark magic, including her. 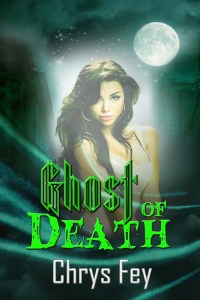 Jolie Montgomery, a twenty-one-year-old woman, wakes up in an alley next to her corpse. She has no memories of her murder or the night she died. She didn’t even see the killer’s face before he or she took her life. Wanting justice, Jolie seeks answers in the only way a ghost can…by stalking the lead detective on the case.

Avrianna Heavenborn is determined to find the person responsible for a young woman’s death. She gets closer to the killer’s identity with every clue she uncovers, and Jolie is with her every step of the way.

But if they don’t solve her murder soon, Jolie will be an earth-bound spirit forever.

When Fey was six years old, she realized her dream of being a writer by watching her mother pursue publication. At the age of twelve, she started writing her first novel, which flourished into a series she later rewrote at seventeen. Fey lives in Florida where she is waiting for the next hurricane to come her way.

Where to find Chrys…