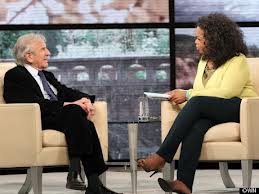 Holocaust survivor. Political activist. Nobel Laureate. Best-selling author of 57 books. In spite of this outstanding roster of achievements, Elie Wiesel still asks himself: What have I done? Is it enough?

Yesterday on Super Soul Sunday, he sat down with Oprah to talk about his recent open heart surgery and his riveting new memoir, Open Heart, a love poem to his wife, Marion, and his grandchildren.

Throughout the hour-long telecast, the octogenarian spoke of the grace and cruelty he has experienced throughout his life. While at Auschwitz, he found it difficult to understand God’s silence and the world’s silence. At age thirty, he broke his own silence and wrote “Night” the bestseller that was translated into thirty languages and sold to millions around the world. Later, he and his wife began the Elie Wiesel Foundation for Humanity.

In recent years, he experienced the loss of his entire life savings and $15 million of the foundation’s money because of Bernie Madoff. When he received the news, he turned to his wife and said, “We have seen worse.” The financial loss did not make him pessimistic or desperate. Instead, he spoke in glowing terms about the hundreds of Americans who sent small donations to the foundation afterward.

I was moved by his comparison of Alzheimer’s disease to a book. Each day, a page is torn out until all that remains are the covers of the book.

Oprah described the interview as a prayer and was deeply moved by his takeaway for all of us:

Whatever you do in life, think higher and feel deeper.

So many wonderful quotes…I’m putting Open Heart on my 2013 reading list.

• Every second counts and every moment matters.

• Hadn’t I lived with death, even in death?

• Illness may diminish me, but it won’t destroy me.

• Life is not a fist. Life is an open hand waiting for some other hand to enter it.

• Indifference enables everything which is bad for life.

• I define myself more by my questions than by my answers.

• To listen to a witness is to become a witness.

• Every moment is a new beginning. Every handshake a promise.

• If life is not an offering to the other, what are we doing on this earth?