Whatever the case, I have always loved snow. When I decided that Bitter Retribution, book three of the Jordan James, PI series, would involve Hollywood actors and a sensational murder suited for the big screen, I had a choice – I could set the story on a sound stage in Burbank, or I could move it elsewhere, on location.

When I made the decision the setting would be on location, I couldn’t imagine a better place to have it than the Colorado Rockies in the snow. The idea of a senseless murder happening in such a beautiful place gives an added layer to the tale, a visual as memorable as any in a crime show drama.

And while I still love snow, Jordan’s latest case reminds us of one thing – much can be hidden beneath the pure, white snow… 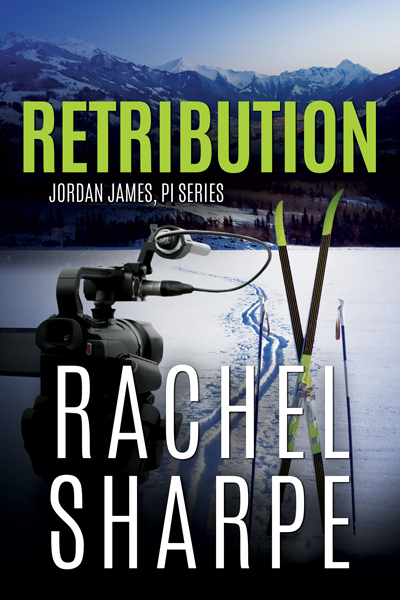 When private investigator Jordan James decided to join her best friend on the set of her hit television series in the Rocky Mountains, she had no idea she would become a key player in a murder mystery more suited for the big screen than the slopes. With one actor dead and a killer on the loose, can Jordan uncover the culprit before another victim makes headlines on Hollywood Minute?

“Don’t let your tears flow,” she insisted passionately from the screen. I glanced up and saw Roch and Nikole embracing while the KGB closed in on them. Slowly, a crescendo of brass arose as Roch and Nikole fought gallantly to their deaths. The credits began and I glanced at the clock. It was ten.

“What garbage,” I laughed aloud, grinning at the thought of meeting Roch Turner the next afternoon. I turned off the television and stretched. Yawning, I walked into my bedroom. After doing one more double-check, I was satisfied I had not forgotten anything. I got ready for bed before climbing beneath my heavy, down comforter and closing my eyes. Sighing contentedly, I thought with excitement about seeing Heather for the first time in six months, skiing in the Rockies, and watching a hit sitcom being filmed. This is going to be the best Thanksgiving ever, I thought happily. pushing images of Rick from my mind.

As I succumbed to the tranquility of slumber, eagerly awaiting a much-needed vacation, I had no idea of the depth and complexity of the situation in which I would soon be enmeshed. I had no idea of the sheer magnitude of the vendetta in which I would find myself, a senseless dispute which began years before my own birth. If I had, I would have ripped my flight itinerary up into a million tiny pieces and stayed in the warm haven of my bed.

Rachel Sharpe is the author of the Jordan James, PI series. Although born and raised in the South, “Yankee” relatives first led Rachel to historic New England, which she has come to consider her second home and is the setting for the series.

After obtaining a Bachelor of Arts in English, Rachel began dedicating her free time to her childhood passion, writing, and in the fall of 2013, she signed with Soul Mate Publishing. An active member of Sisters In Crime, Rachel currently resides with her husband and children in the Greater New Orleans area.

Check Out Rachel’s Sites to Keep Up with Jordan James!!!

Get your copy here!