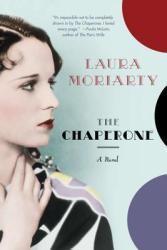 Having supervised many high school dances and activities, I could easily empathize with Cora Carlisle as she tried to restrain the wild and rebellious fifteen-year-old Louise Brooks. But Cora faced an even greater challenge: she agreed to chaperone Louise for an entire month in New York City.

The two women could not be more different. While Cora’s childhood was tumultuous, she married well and led a comfortable life in Wichita, Kansas. An early “lady driver” and suffragette, she still espoused traditional values and dressed modestly, wearing high collars and constricting corsets. On the other hand, Louise defied convention by dressing provocatively and flirting with every man she met.

Often frustrated by her charge, Cora quickly realized she would have little, if any, impact on the younger woman. But that did not stop her from exploring her own orphan roots. Born in New York City at the turn of the century, Cora was placed in an orphanage run by nuns. As one of the healthier charges, she was sent off on trains throughout the Midwest. She was “part of an exodus, a mass migration that spanned over seventy years.”

While those five weeks did not change Louise, Cora underwent a major transformation and discovered new possibilities for her life. Upon her return to Wichita, she made dramatic changes to her domestic arrangement and became more involved with the social issues of her day: homosexuality, KKK, contraception, unwed mothers, Prohibition.

Author Laura Moriarty has skillfully combined fact and fiction to produce a compelling novel about two very different women in search of freedom and fulfillment.

Highly recommended for fans of historical fiction and women’s literature.