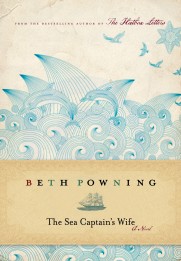 Last evening, nine of us gathered to discuss Beth Powning’s novel, The Sea Captain’s Wife. While some of the ladies found parts of the book too slow and drawn out, I was captivated by this tale of adventure set in the 1860s.  While reading the book, I thought of the Hero’s Journey and the many trials of Job.

Azuba, the daughter of a shipwright in New Brunswick, has grown up around the water and dreams of sailing around the world with her husband. But when she marries veteran captain Nathaniel Bradstock, he insists that she stay on land and avoid the perils of sea voyages. Bound by the social mores of the era, Azuba honours her husband’s wishes and resigns herself to having an absentee husband. After a miscarriage, she befriends the local minister and spends an innocent evening with him. When Nathaniel returns, he hears the gossip and informs his wife that he has changed his mind. Azauba and their daughter, Carrie, must accompany him on the next sea voyage around the world.

In the journey that follows, the Bradstock family encounters many challenges, among them sea storms, threats of mutiny, dwindling supplies,  and a pirate attack. Powning’s research skills are impeccable. We can easily imagine the dangerous beauty of Cape Horn, the stifling heat of the tropics and the grandeur of European and American port cities during the 19th century.

Powning also addresses many of the themes we still struggle with today:  What are we willing to sacrifice for our desires? What happens when our dreams are realized, but not to our specifications?

In an interview, Powning admitted to having insight into Azuba’s life. In 1972, she and her husband bought a 1870’s farm in New Brunswick, where they established a pottery business. The couple had one telephone on a twelve-party line, a wringer washer, a wood cook stove and a clothes line.They cut their own firewood and hauled it down from the forest. She provides the following vivid description: “Going to the outhouse, fireflies made an erratic blinking in the meadows. Nights, there was silence, save for the rushing of rivers and the call of owls.”

Historical fiction at its best–I highly recommend this novel written by an excellent Canadian author.