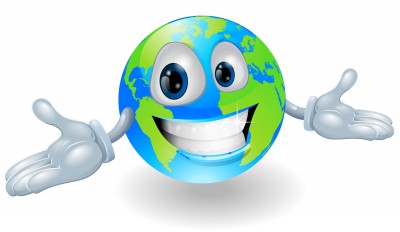 Select jokes that have unexpected conclusions. If your audience can predict the punch line, you will likely encounter more groans than laughs.

Consider using one of the following jokes.

Leroy had fallen on hard times. He lost his job at the fertilizer plant, his wife left him, his unemployment ran out, and he was evicted from his apartment. He packed what little he had in a knapsack, made a sign that read “Will work for food” and set off down the road on foot.

Toward the middle of the day, he came to a farmhouse and knocked on the front door. A woman answered. Leroy explained his situation and how he would do almost anything for food.

At first, the woman wanted no part of Leroy, but he persisted. Finally, she asked, “Can you paint?”

The woman found a can of paint and a brush. “Go around back and paint the porch. I’ll fix you dinner.”

Happily, Leroy went to work. About forty minutes later, he appeared at the front door.

“Are you finished so soon?” asked the woman.

Four monks were meditating in a monastery. Suddenly, the prayer flag on the roof started flapping.

A young monk came out of his meditation and said, “Flag is flapping.”

A third monk who had been there for more than 20 years said, “Mind is flapping.”

The eldest monk was visibly annoyed and said, “Mouths are flapping!”

A rabbi and a priest met at the town’s annual picnic. They were old friends and began their usual banter.

“This ham is delicious,” the priest teased the rabbi. “Your really ought to try it. I know it’s against your religion, but you haven’t lived until you’ve tried Mrs. Hall’s prized Virginia ham. Tell me, when are you going to break down and have some?”

The rabbi looked at his friend with a big grin and said, “At your wedding.”

I am always impressed by Joke Masters who can skillfully deliver jokes with interesting detail and vocal variety. And they do so without using accents or high-pitched voices.  Instead, there is a certain rhythm to the joke that elicits laughs from everyone at the appropriate times.

Experiment with these jokes at your next Toastmaster meeting…

A man is flying in a hot air balloon and realizes he is lost. He reduces height and spots a man down below. He lowers the balloon further and shouts, “Excuse me, can you tell me where I am?”

The man below says: “Yes. You’re in a hot air balloon, hovering 30 feet above this field.”

“You must work in Information Technology,” says the balloonist.

“Well,” says the balloonist, “Everything you have told me is technically correct, but it’s no use to anyone.”

The man below says, “You must work in business.”

“I do,” replies the balloonist, “but how did you know?”

“Well,” says the man, “You don’t know where you are, or where you’re going, but you expect me to be able to help. You’re in the same position you were before we met, but now it’s my fault.”

Two little boys were best friends at church, but they both had a reputation for getting into trouble. One Sunday, one of the boys was sick and stayed home. The other boy went to church and was twice as bad as normal.

After church, the pastor grabbed him and asked in an angry voice, “Where’s God?”

The little boy was frightened and didn’t know what to say.

The pastor continued, “I want you to go home and think about it. I don’t want you to come back until you can tell me where God is.”

The boy went home and called his sick friend on the telephone. “Guess what,” he said. “They’ve lost God, and they’re trying to blame that one on us, too.”

The most effective Joke Masters have a knack for telling a joke that is appropriate for the audience at hand.  Very few of them deliver five-minute jokes. They like to keep the jokes short and sweet, usually limiting themselves to less than a minute.

A woman was becoming frustrated with her teenage son’s unwillingness to prepare even the simplest meal. One night, she said in exasperation, “All I’ve done is taken food out of the freezer and heated it in the microwave. You could do that. You know how to push buttons, right?”

A frog was feeling down in the dumps, so he went to visit a froggy fortune-teller, hoping to hear some good news.

“Froggy,” said the psychic. “You’re going to meet a beautiful young woman who’ll want to know everything about you.”

“That’s great!” exclaimed the frog. “Where will I meet her—at a party, in a bar, down by the pond?”

“In a biology class,” replied the psychic.

An elderly woman is being examined by a young physician. After about four minutes, she bursts out of the examination room. Spotting an older doctor, she tells him what happened.

The doctor marches down the hallway toward his younger colleague. “What’s the matter with you?” he asks. “That woman is 74 years old. Why would you tell her she’s pregnant?”

“Does she still have the hiccups?” asks the young doctor.

In “Evaluate to Motivate,” Brian discussed the benefits of evaluation and several common formats, among them…

While I was familiar with these formats and appreciated the review, I was intrigued by his description of the “Food Coloring in Water” format.

The water represents a speech and the food coloring,  different points of criticism. If a speech evaluator focuses on one main point, the toastmaster who has delivered the speech can learn and grow from the experience. The positive and constructive criticism will inspire her to speak again and soon.

However, if the evaluation covers too many negative points, the toastmaster may become confused and frustrated. She may forget all the good points of her speech (water) and instead focus on the overwhelming negativity (excessive amounts of food coloring).

Regardless of the format used, Brian stressed the need for…

Appropriate, well-timed humor definitely adds to the Toastmaster experience. As Joke Master, it can be a challenge  to find  and deliver a suitable one-liner, groaner or anecdote that pleases everyone.

These are some of my favorites…

A Buddhist monk strolled into a Zen pizza parlor and said, “Make me one with everything on it.”

The owner obliged. When he turned over the pizza with all the trimmings, the monk gave him a twenty-dollar bill which the owner stuck in the cash register.

“Where’s my change?” the monk asked.

The owner replied, “Change must come from within.”

Source: Become Who You Were Born to Be by Brian Souza

A woman invited some people to dinner. At the table, she turned to her six-year-old daughter and asked her to say the blessing.

“I don’t know what to say,” the little girl replied.

The daughter bowed her head. “Lord, why on earth did I invite all these people to dinner?”

Peter and James were walking through the juggle. Suddenly, a tiger appeared from a distance, running toward them. Peter took out a pair of Nike running shoes from his bag and started to put them on.

“Do you really think you will run faster than the tiger with those?” James asked.

Peter replied, “I don’t have to outrun it, I just have to run faster than you.”

New Life Church, with its large altar and colorful autumn displays,  provided the perfect backdrop for the contestants. We were all able to relax in the comfortable seats and listen to nine prepared speeches and seven impromptu talks.