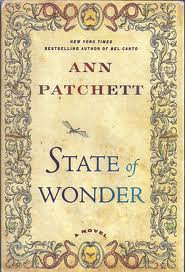 Bad news arrives by way of Aerogram. Anders Eckham has died of a fever in a remote part of Brazil.

His colleague, Dr. Marina Singh, who does unremarkable research on cholesterol at Vogel, a large pharmaceutical firm based in Minnesota, experiences “a very modest physical collapse” when she hears the news from her unremarkable lover, Mr. Fox, the company CEO.

As these two emotionally crippled characters struggle with the news, they realize that Anders’ wife, Karen must be told. After delivering the news haphazardly, Mr. Fox concludes that Anders bungled his mission and decides to send Marina to investigate the situation in Brazil.

Dr. Annick Swenson, a former medical school professor who stopped Marina’s medical career in its tracks, is supposedly creating a fertility drug that will allow women to bear children well into old age. Excited by the prospect of this wonder drug, Vogel funded the research and gave the formidable Dr. Swenson considerable latitude. Unfortunately, the septuagenarian considers herself beyond reproach and does not feel accountable to Vogel.

The story follows Marian as she travels from the plains of Minnesota to the heart of the Amazonian rainforest. Along the way, she loses her luggage, not once but twice. Forced to dress like the natives, her skin darkens and she is even mistaken for a member of the Lakashi tribe.

While working with Dr. Swenson, Marina faces her demons. We learn of the foreign graduate-student father who abandoned his family long before “that had become the stuff of presidential history” and Marina’s dealings with “all those translucent cousins who looked at her like she was a llama who had wandered into their holiday dinner.” We hear and see her severe reaction to the anti-malarial medication she had to take while visiting India and, now Brazil. And we learn of the tragic mistake that derailed Marina’s surgical career.

Set deep in the Amazon jungle, State of Wonder is primarily an adventure tale, replete with poison arrows, snakes and cannibals. While reading I could easily visualize the ravenous mosquitoes and floating snake heads and feel the oppressive heat and powerful storms. But Ann Patchett goes beyond the adventure, skillfully weaving some of the most important social issues of our time into this provocative and ambitious novel.