Thank you, Joanne, for having me on your blog. It’s always fun to talk to readers.

So why a book about a woman who starts over, moves from Paris, France to New Haven, CT, goes back to school, and online dates? 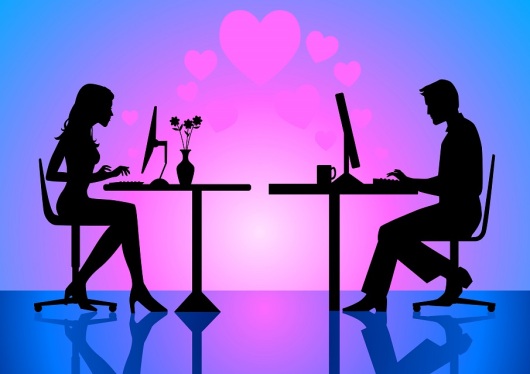 Well, I sort of did the same thing. I’d been living in Greece for eleven years and my marriage was failing.

What triggered my decision was a mundane exchange between me and my husband one evening over what was the plan for dinner. And it was in the middle of that conversation that I realized I no longer wanted to be married. A realization that had been coming for a long time.

I moved back to Connecticut to start over, went back to school and started dating.

While writing the book––and talking about my characters as if they were friends––my real friends asked questions. By this time, they were familiar with the book’s heroine, Sunny Chanel, who was online dating. Over happy hour appetizers and wine, they’d pepper me for answers. “How much is autobiographical?” “Was that a true story about the 300-pound man Sunny dated?” “Did you really go on six meets in one week?”

Sure, there’s a bit of me in Middle Ageish, because making fiction and turning experience into a belly laugh is much more fun than humans should have. And I’m having the time of my life, pumping my checkered past for “copy” as Nora Ephron (or was it her mother?) called everything that was story material.

Starting over is a real thing. It resonates with happily married women because they have no idea about how tough online dating can be. And they’re fascinated and glad they aren’t dating. Divorced women, on the other hand, are intimated by the pitfalls and stories they’ve heard.

Lucky for them I’ve got a website chock full of tips and suggestions for anyone started over. There are articles for men, too, such as how to entice a woman to email him back, written with Peter, a friend of mine who’s been around the dating block a few times. These days he’s distance dating, so I’m planning on interviewing him now that the world of online dating has shifted.

Thinking about venturing out there? When it comes to online dating, remember that nothing counts until you meet. Emailing and zooming aren’t dating, but they’re a good start.

Tagline: Don’t leave home without your sense of humor.

Sunny Chanel’s marriage is circling the drain when her husband marks his colonoscopy on the calendar and ignores their anniversary. With divorce papers instead of roses on the horizon, she says “au revoir” Paris and croissants, and “hello” cheap New Haven apartment and ramen noodles.

Encouraged by her friends, Sunny jumps into online dating, twenty-three years and twenty pounds after her last date. To her surprise she discovers dating might require a helmet, and occasionally armor to protect her heart, but after years of being ignored, her adventurous side craves fun and conversation. She’s middle-aged not dead. Then suddenly, on the way to reinventing herself, life takes a left turn when the one man she can’t forget calls with an unexpected request.

“Last night was number nine,” I said, en route to a job interview. In the car, I shared recent experiences with my best friend Isabel while she kept me company on the phone. School was out, and I’d caught her prepping in her classroom.

“You’ve reduced your meets to numbers?”

“What’s the point in names? I’m not seeing any of these guys again, and you just get confused.” I pulled into the Waffle Cone parking lot and unhooked my seat belt.

“True. But you’re turning into a cynic.”

“As soon as I find my someone special, I’ll tell you his name.”

“Sounds good. So what about your number nine?” Isabel had met her guy online.

“We traded tales from the trenches and he—”

“Trenches?” Her voice rose. “What trenches?”

“Dating trenches, what other kinds of trenches do you think?” Isabel is way too sheltered. “He met eight women, all in one day. In a coffee shop in Hartford. Two coffee shops. Back to back appointments.”

“You are joking.” She cackled, not a pleasant sound.

“People do these things?” Isabel asked. She’s lost touch, been with Roberto far too long.

“Oh, lots of weird behavior. I thought it was bold. In fact, I can’t believe what some guys tell me. And do. Like this guy––” I opened the car door, drooling for a vanilla cone with sprinkles.

“This other guy has no boundaries and he––”

Oh well. I slid out of the car. Isabel didn’t have a clue about my secret online dating life. 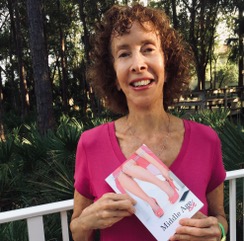 Shirley Goldberg is a writer, novelist, and former ESL and French teacher who’s lived in Paris, Crete, and Casablanca. She writes about men and women of a certain age starting over. Her website http://midagedating.com offers a humorous look at living single and dating in mid life, and her friends like to guess which stories are true. Middle Ageish is her first book in the series Starting Over. Her character believes you should never leave home without your sense of humor and Shirley agrees.

Visit my website for another excerpt from the book. Sign up and grab a copy of Happy Hour, a short story about an online meet and a tiny misunderstanding. https://midagedating.com/