I’m thrilled to present the cover for Kate Sparkes’ novel… 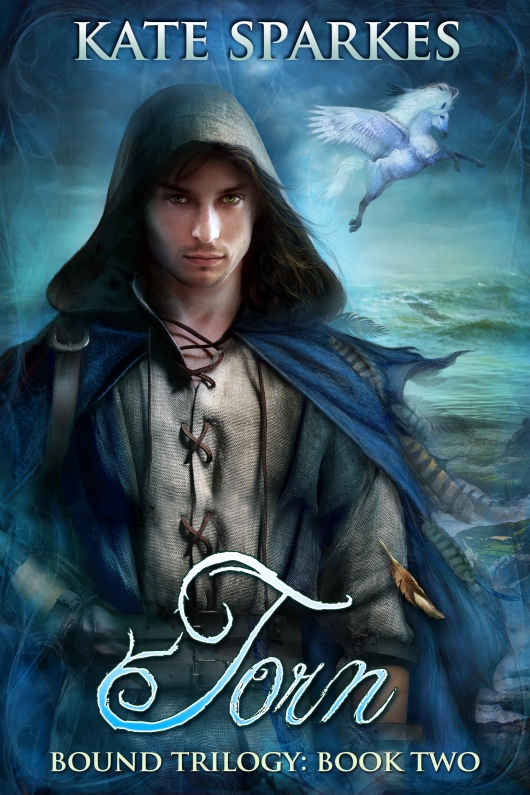 Aren Tiernal knows that safety is an illusion, that his cruel and powerful brother Severn will never forgive his betrayal. Still, returning to Tyrea to challenge Severn for the throne would be suicide. It’s not until Severn himself comes to collect what’s owed to him that Aren decides to risk everything in an attempt to bring down the most powerful Sorcerer Tyrea has ever known. It’s a mission that seems doomed to fail, but it’s Aren’s only chance to save himself, his country, and the woman who thawed his heart.

Rowan Greenwood has troubles of her own. Though she has potential to become a great Sorceress, years of being closed off from her magic have left her unable to control her incredible power. When a pair of ominous letters arrive from her home country, Rowan has to choose between her new life and a chance at saving a family member’s life—and just maybe changing an entire country’s beliefs about the evils of magic.

Torn apart by separate quests, Rowan and Aren will have to discover untapped strengths and confront their darkest fears in order to overthrow a ruler determined to destroy them both.

In the meantime, take advantage of the following sale… 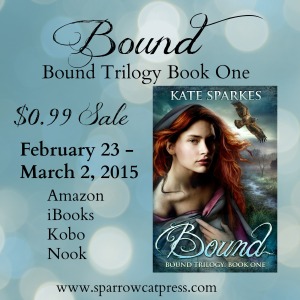 For over a year, I have followed Kate’s blog and enjoyed her delightful take on the long and winding road to publication. Today, Kate is sharing more of that journey and celebrating the release of her debut novel, Bound.

It’s quiet here tonight. The kids are yelling outside, but in here… silence. The book is published. No more scurrying around, making last-minute changes. No more worrying about whether it’s going to be ready in time. Just me, a cat, a cup of tea, and room to breathe.

It feels very different from my life when I started writing this book. That was three and a half years ago– November 2010. Back then the kids were smaller, and always under-foot (or on lap, if I wanted to write). We lived in another province. I knew I wanted to be a writer, but had never actually finished a book. My writing life was a series of amusing short stories that I never showed to anyone, plus a trail of started-and-abandoned novels. But I had a story in my heart, and I decided to make it happen.

If you’d told me then how this would all turn out, I might have given up.

You see, it’s been an interesting journey, and a challenging one. And challenges? They’re not really my thing.

I’d have despaired if I’d known it would be almost four years before the book would see the light of day. If you’d whispered in my ear the number of re-writes, edits, corrections, and lost files I’d encounter, I’d have politely showed you to the door and collapsed, sobbing, onto the (unswept) floor. And if you had told me what a hard time Aren would give me over his motivations, and Rowan over her personality… honestly, I’d have killed them both off in chapter one and written about unicorns and bunny rabbits.

So much has happened since then, though. I’ve changed, grown stronger and more resilient, and learned that the work is its own reward. I’m not afraid of the hard work any more. My path has changed. Me of 3.5 years ago didn’t even have independent publishing on her radar. Me of today is glad I chose this path instead of one that might be a good fit for many people, but wouldn’t have worked for me. I’ve learned so much about writing, publishing, and myself.

This book has been a part of me for years, now, and it’s come a long way. I hope I’ve improved as much as the book has. I think I have, as an author. As a person… well, maybe that could still use some work. But there’s still a whole lot of journey left ahead of me as I finish this trilogy and move on to other projects.

All I can do is follow my dear characters’ example, and take the adventure as it comes.

Welcome to Darmid, where magic is a sin, fairy tales are contraband, and the people live in fear of the Sorcerers on the other side of the mountains.

Rowan Greenwood has everything she’s supposed to want from life—a good family, a bright future, and a proposal from a handsome and wealthy magic hunter. She knows she should be content with what she has. If only she could banish the idea that there’s more to life than marriage and children, or let go of the fascination with magic she’s been forced to suppress since childhood.

When Rowan unknowingly saves the life of one of her people’s most feared enemies, that simple act of compassion rips her from her sheltered life and throws her into a world of magic that’s more beautiful, more seductive, and more dangerous than she ever could have imagined.

Rowan might get everything she ever dreamed of—that is, if the one thing she’s always wanted doesn’t kill her first.