Mortician, Lily Reynolds is used to seeing bodies, but not the type murdered in her own funeral home. As Detective James Rivers zeroes in on her as the town’s number one suspect she must rise above the accusations and rumors to solve the case herself while keeping her attraction to the troubled detective at bay.

James has a past. The last time he let someone into his life she wound up dead. Vowing never to let that happen again he has sworn off dating for good. Until he meets Lily. In his gut he knows she’s not the murderer but pressure to solve the case puts him on the wrong trail while he struggles to keep Lily off the case.

Can she solve the case on her own or will their scandalous romance get in the way of proving her innocence?

“Lily, can you go down and check on the new body? The last thing I need is a decomposing corpse.”

Lily Reynolds sucked in a frustrated breath at her older sister Shanna’s yell from the Reynolds Funeral Home embalming room.

Her twenty-year-old younger brother, Zachary, often forgot to secure the latch on the refrigerator doors after he pushed the recently deceased into the compartment. It was a critical mistake no one wanted to explain to the dead person’s family. But Lily didn’t understand what was difficult about doing it right the first time. Zachary had been working at the family business for almost five years—same as her. One would think the importance of the simple task would sink into that thick skull.

Now, she had to stop applying lipstick to Mrs. Klein, whose viewing was scheduled to start in one hour, and go downstairs to check on the refrigerator.

She pulled off her latex gloves and made her way down to the basement level where Antonio, their hearse driver, usually pulled in with Zachary in the shotgun seat and their newly acquired client in the back. Upon arrival, the client was inserted into an individual horizontal refrigerator for preservation until it was time for embalming and then a makeover by Lily.

At the bottom of the stairs, she flicked on the fluorescent lights, and didn’t see the black hearse. That meant Zach was with Antonio, probably picking up another client. It had been a busy week at the funeral home—not a complaint. She liked her job. She got to perform a service for the loved one’s family and be creative at the same time. 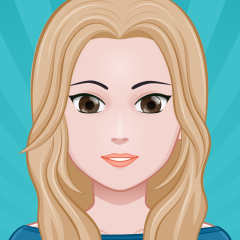 When Ana Diamond isn’t writing about tough gals finding love in unexpected places, she’s at work by day in the medical field. She writes romantic cozy mystery novels with feisty strong women and alluring men who can’t resist them. Her books are fast paced, entertaining and heartfelt all at once.

Ana is a 2020 Tara Contest Finalist for Body Conscious and 2015 Melody of Love contest finalist. She lives in New York with her husband, two children and two needy but wildly entertaining kitty cats.

Ana Diamond will be awarding a $25 Amazon/BN GC to a randomly drawn winner via Rafflecopter during the tour. Find out more here

Visit Ana on the rest of her Goddess Fish tour here.