After escaping the guillotine, Noelle de Vallon takes refuge with her aunt in England. Determined to make her own way, she joins the local smugglers, but when their plans are uncovered, Richard, Lord Boltwood steps out of the shadows to save her. Too bad he’s the last man on earth she ever wanted to see again.

Years ago, Richard Boltwood’s plan to marry Noelle was foiled when his ruthless father shipped him to the Continent to work in espionage. But with the old man at death’s door, Richard returns to England with one final mission: to catch a spy. And Noelle is the prime suspect.

Noelle needs Richard’s help, but how can she ever trust the man who abandoned her? And how can Richard catch the real culprit while protecting the woman who stole his heart and won’t forgive him for breaking hers?

“Open it, my love,” Richard said. “If you don’t like it, the jeweler will allow us to exchange it for something else.”

Slowly, almost reluctantly, Noelle opened the little box. Nestled inside was a delicate necklace of diamonds and sapphires. “It’s beautiful.” She didn’t touch it. She returned it to his hand.

“Take it, sweetheart. It will suit you admirably and as befits my wife.”

She sighed. “As I have told you over and over, I will not marry you.”

He tried to drum up his usual lighthearted retort, but fortunately she forestalled him.

“I will accept your gift under one condition,” she said.

He managed a smile. “A condition. How delightful! Do tell me.”

Noelle, his darling, the love of his life, said, “Will you take me as your mistress instead?”

Winner of the Holt Medallion, Maggie, Daphne du Maurier, Reviewer’s Choice and Epic awards, Barbara Monajem wrote her first story at eight years old about apple tree gnomes. She published a middle-grade fantasy when her children were young, then moved on to paranormal mysteries and Regency romances with intrepid heroines and long-suffering heroes (or vice versa). Regency mysteries are next on the agenda.

Barbara loves to cook, especially soups. She used to have two items on her bucket list: to make asparagus pudding (because it was too weird to resist) and to succeed at knitting socks. She managed the first (it was dreadful) but doubts she’ll ever accomplish the second. This is not a bid for immortality but merely the dismal truth. She lives near Atlanta, Georgia with an ever-shifting population of relatives, friends, and feline strays.

Barbara Monajem will award a $10 Amazon Gift Card and Paperback and Socks Swag set to two lucky winners (United States and Canada only) in the Rafflecopter giveaway. Find out more here. 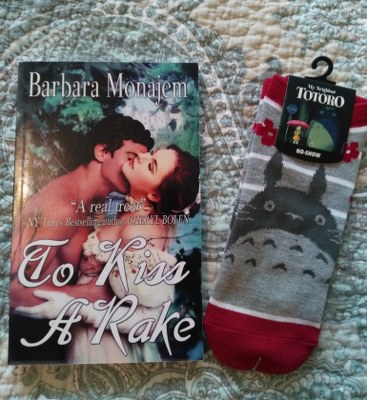 Follow Barbara on the rest of her Silver Dagger tour here.

2 responses to “Spotlight on The Smuggler’s Escape”