Thank you to fellow Soul Mate Publishing author, Joanne Guidoccio, for inviting me to be her guest blogger today!

Indigo Sky was inspired by Bierstadt’s 1867 Domes of Yosemite. A trip across nineteenth-century America, two men were tied together by a passion of discovery. Words and images of the vast West made news back home. Below, find how it all began. 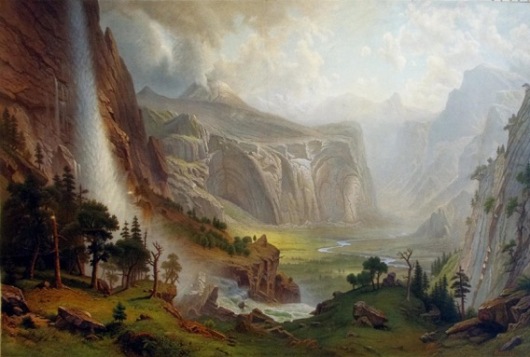 In the mid-19th century, 1863, LeGrand Lockwood purchased parcels of land in Norwalk, Connecticut and built his sixty-two room county cottage in 1863. He hired artist Bierstadt for $25,000 to paint an American West theme. Painters of the day were producing murals on canvas.

Domes of Yosemite, 10’H x 15’W hung in the mansion’s Rotunda (ballroom space) in 1867. In the panic of 1873, Lockwood lost his business in shipping, railroads and gold. Four years later he died from pneumonia. Lockwood’s death prompted his wife to dispose of the furnishings and furbishings. Mrs. Lockwood then made an arrangement with Cornelius Vanderbilt to purchase the mansion. The painting, among other Lockwood possessions, was sold to a New York auction gallery for $5000. Three years later Horace Fairbanks, inventor of the platform scale, paid $5100, and trucked the painting up to his family home and business in St. Johnsbury, Vermont. He built a gallery customized to accommodate this huge work. It’s still there to this day! The short story—I called the director of the athenaeum and asked him if he knew the painting once belonged to Mr. Lockwood? He said, “Yes, it is thrilling to be the owners of this treasure. “Shamelessly, I asked if the athenaeum would consider donating it back to the mansion?

Since he, of course, said a flat “NO,” I asked if he would give me permission to paint a copy? He said, “Of course.” A simple straight 4 ½ hour drive north to Vermont took Tom and me to the St Johnsbury gallery in November, 2008. With my photography and materials from the athenaeum, I had solid information to create my painting.

The painting was spectacular, even with the damage caused by extreme temperature changes and humidity. Finally, the gallery was renovated a few years ago. What was it about this painting that inspired me to write my book? Precipitated by Bierstadt’s journey. For the story, visit blog Nights of Passion on Friday 8/5/16 hosted by Stacy Hoff.

One liner: A dream marriage becomes a trap of addiction, lies and women.

Back Cover: In a whirlwind romance, a lovely New York socialite marries a fêted, debonair author. But beneath the charm is a cheating husband addicted to hasheesh. Her dream marriage turns sour and the simplicity of her life runs amok when a handsome stranger, her husband’s business partner, threatens her staunch loyalty to her wayward husband. When she faces the ugly truth about her marriage, her need to finalize her divorce sends her on mad chase across the wilds of nineteenth century America with a handsome stranger—she learns hard lessons of murder, kidnapping and more that almost destroy her.

Where to find Gail Ingis…

5 responses to “Inspiration for Indigo Sky”