The first stage of my adult life was all about family and animals, animals, animals. The animals included rescued racehorses, cats, and dogs. Luckily, I convinced my husband to move to a farm in rural Virginia against his wishes. At one point we had 28 rescue horses, 12 cats, 10 dogs, and a cow. And it’s not like we were rich. My husband was a Lieutenant JG in the US Navy. I was a stay at home mom raising two young kids, but I soon began running horse shows to help with our finances. We were also very fortunate to have two wonderful teenagers spend their time with us, trading babysitting for riding lessons. They quickly became part of our family.

It was a great life – kids, animals, the outdoors, and competing in area horse shows.

But then came the day that the kids all grew up and we arrived at empty nest syndrome. The fun went out of the animals, the farm and the competitions. I struggled to keep it going, but it wasn’t the same. It all came to an abrupt end when our oldest daughter and I went to a horse show on one of her college breaks. We were warming our horses up for the show when one of us said to the other, “Are we having fun anymore?” It was a shocking question because the answer was no. To this day we don’t remember which of us asked it, but the realization was gut-wrenching. It was the last time we showed our horses.

Our daughter went back to school. I was left with no idea what to do with my life.

So I cried for a year – in grief for the loss of a life I loved, and in fear of an empty future with nothing to replace it. My family was supportive and put up with me. For that year, I kept asking myself, what can I do with my life? I like being passionate and challenged daily, but I had no training for anything specific. Finally at the end of that year, I reversed the question I was asking myself. Instead of “What can I do,” I flipped it to, “If I could do anything in the world I wanted, what would I do?”

With the change in the question, all sorts of possibilities started popping up. The craziest of which was work in film, not as an actor, but behind the scenes. I knew absolutely nothing about how one worked on a film, so I bought books and read avidly. There wasn’t any film work locally, so I fixated on going to Los Angeles. My husband was about to retire, and the change to California mildly interested him. I heard all the “you’re too old to be hired,” (late forties), “you’re crazy,” and from my own mother, “I hope you’ll fail, so you’ll come back to Virginia.” My husband and kids weren’t sure about the move either, but they gave me the encouragement to go for it.

Relocated in LA, I did temp work at first and took film production classes at UCLA. Within a couple weeks I was applying for film jobs. Then I landed one as a production assistant which had over 100 applicants for a nonpaying position. The job got my foot in the door, and I was soon hired on with a salary. It turned out that my running of horse shows as events correlated directly to working on a film. I had had no idea. Other jobs came rapidly after the first one. And then one day I picked up a script and read it. I had always been an avid reader, never considered myself as a writer, but something about the screenplay writing pulled me. I had to face another choice. Go to school to learn screenwriting or continue working on film as a production coordinator. Film projects are demanding. Eighteen to twenty hours a day are not uncommon. If I tried to do both, I would miss the majority of any classes I tried to attend. I could only do one. The writing won. There was something about it that pulled me.

It was back to office temp jobs that were nine to five and let me attend UCLA Extension nightly. I studied, I wrote, I won awards, my screenplays were optioned, but none produced yet. And then came another turning point. My writing mentor from Women in Film suggested I write one idea as a novel. I was starting to feel like I should ask UCLA for a discount, but it was back to school for more classes on novel writing. It was fortunate there was a large amount of crossover between screenplays and books.

What followed was Land Sharks – A Swindle in Sumatra (a mystery/romantic suspense) and The Reluctant Farmer of Whimsey Hill (a family memoir about life on our farm). What also happened was that I found that writing books was the place I wanted to be. The authors I met were great people and truly supportive. I had found my creative happy place. This was where all my steps had brought me and this is where I’m staying.

And my very special family? My husband and oldest daughter have both become writers and our youngest daughter is our greatest supporter.

My advice for those reaching their Second Stages – Dare to think big!

A fall from grace costs Lexi a position at a top New York financial institution. She ends up in a job at a small private bank in Beverly Hills. But that’s okay, she still gets to work in her favorite field – catching white collar crooks. At least that’s what she tells herself. But when Karista, the daughter of one of the bank’s principal investors, runs into danger while traveling in Indonesia, Lexi’s job comes to depend on her ability to save her. Even worse, Lexi will have to baby sit Steve, her boss’ well-meaning but spoiled son, while going undercover to reach the heiress. Lexi’s cushy tropical assignment soon spirals into chaos as she has to outrun fashion-forward Batak natives, outwit an arrogant FBI agent, help Steve find his stolen Air Yeezy sneakers, and figure out why her ardent former lover and debonair gentleman thief, Andre, is staying at the same resort. Lexi will have to be very good or very lucky to survive it all. 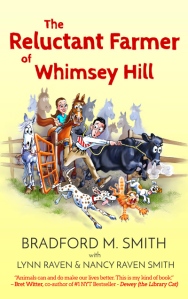 In The Reluctant Farmer of Whimsey Hill, opposites attract; for better or for worse. That is what troubles animal-phobic, robotics engineer Smith who just got married. He learns that his bride’s dream is to have a farm where there are lots of animals and she can rescue ex-race horses to retrain and find them new homes. But according to a Meyers-Briggs Personality Test that they took for fun, their marriage is doomed. There is only one problem: the newlyweds took the test after the wedding.

Whether Smith is chasing a cow named Pork Chop through the woods with a rope, getting locked in a tack room by the family pony, being snubbed by his wife’s dog, or unsuccessfully trying to modernize their barn using the latest technology, the odds are stacked against him. It seems like everything with four legs is out to get him. Will the animals win, forcing Smith to admit defeat, or will he fight to keep his family and the farm together?

Enjoy the true, warm, and frequently hilarious stories of Smith’s journey along the bumpy road from his urban robotics lab to a new life on a rural Virginia farm.

Where to find Nancy…

Nancy, thanks for sharing your inspiring journey. How wonderful to live, study and work in L.A. Best of luck with all your future endeavors.

14 responses to “Dare to Think Big”