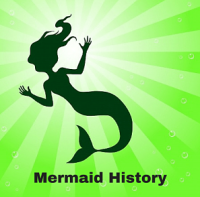 Before writing Between Land and Sea, I researched mermaid sightings. I expected to find only a handful of examples and was surprised by the lengthy list and vivid descriptions that emerged. So much so, that I’ve devoted several posts to this topic.

Today, I will focus on ten documented sightings before 1800.

1. First Century AD: Roman author, naturalist and philosopher Pliny the Elder wrote about the Nereids that were found dead on the seashore. He described their bodies as rough and scaly like fish and then went on to share other supporting evidence: “I have, too, some distinguished informants of equestrian rank, who state that they themselves once saw in the ocean of Gades a sea-man.”

2. Between 1040 and 1105: Rabbi Shlomo Yitzchaki wrote about mermaids in the Talmud: “There are fish in the sea with which half is in the form of man and half in the form of fish, called sereine in Old French.”

3. During the same period, Moshav Zekeinim provided the following details about mermaids (Sirens) in a commentary on the Torah: “This refers to the creature in the sea which is similar in part to a person, from the navel upwards, and it is similar to a woman in all aspects in that it has breasts and long hair like that of a woman, and from the navel downwards, it is a fish. And it sings beautifully, with a pleasant voice.”

4. 13th Century: The King’s Mirror, a Norwegian educational text originally intended to provide King Magnus Lagabote with advice on various subjects, included the following description of a creature found off the shores of Greenland: “Like a woman as far down as her waist, long hands, and soft hair, the neck and head in all respects like those of a human being. The hands seem to be long, and the fingers not to be pointed, but united into a web like that on the feet of water birds. From the waist downwards, this monster resembles a fish, with scales, tail, and fins…This monster has a very horrible face, with broad bow and piercing eyes, a wide mouth and double chin.”

5. 1389: In his book, Eastern Travels of John Hesse, the author described the perils encountered during his voyages. He wrote: “We came to a stony mountain, where we heard syrens singing, mermaids who draw ships into danger by their songs. We saw there many horrible monsters and were in great fear.”

6. 1403: During a heavy storm, a mermaid drifted inland through a broken dyke on the Dutch coast. At first afraid but later intrigued, several local women and their servants befriended the mermaid. They took the mermaid home and tried to domesticate her, clothing and feeding her dairy products and meats. After a number of thwarted escapes into the sea, the mermaid resigned herself to her new life and died fifteen years later. John Swan, an English minister, described her story in Speculum Mundi, a book released in 1635.

7. 1493: After spotting three mermaids rising from the sea, Christopher Columbus wrote in the ship’s journal: “They were not as beautiful as they are painted, although to to some extent they have a human appearance in the face.” He noted that he had seen similar creatures off the coast of West Africa.

8. 1608: After two of his company reported a mermaid sighting, explorer Henry Hudson wrote in the ship’s journal: “Two crew members–Thomas Hilles and Robert Rayner–sighted a mermaid at 75o7’N (Russia) and shouted at the rest of the crew to come and look…From the navel upward her back and breast were like a woman’s, as they say that saw her; her body as big as one of ours; her skin very white and long hair hanging down behind, of colour black. In her going down, they saw her tail, which was like the tail of a porpoise, and speckled like a mackerel.”

9. 1614: Captain John Smith, of Pocahontas fame, reported a mermaid off the cost of Massachusetts: “The upper part of her body perfectly resembled that of a woman, and she was swimming about with all possible grace near the shore. It had large eyes, rather too round, a finely shaped nose (a little too short), well-formed ears, rather too long, and her long green hair imparted to her an original character by no means unattractive.”

10. 1797: While walking on the shore of Sandside Bay (Scotland), schoolteacher William Munro spotted a mermaid sitting upon a rock. In his letter to Dr. Torrance in Glasgow, he wrote: “…my attention was arrested by the appearance of a figure resembling an unclothed human female, sitting upon a rock extending into the sea, and apparently in the action of combing its hair, which flowed around its shoulders, and of a light brown colour…The cheeks ruddy, the eyes blue, the mouth and lips of a natural form, resembling those of a man; the teeth I could not discover, as the mouth was shut; the breasts and abdomen, the arms and fingers of the size in which the hands were employed, did not appear to be webbed, but as to this I am not positive.” The complete letter appeared in The Times of London on September 8, 1809.