Today, we have Barb Taub inspiring and entertaining us with her version of HEA (Happily-Ever-After), or more precisely HFN (Happily-For-Now), and a Second Act (Chapter 3) jam-packed with Saturdays. 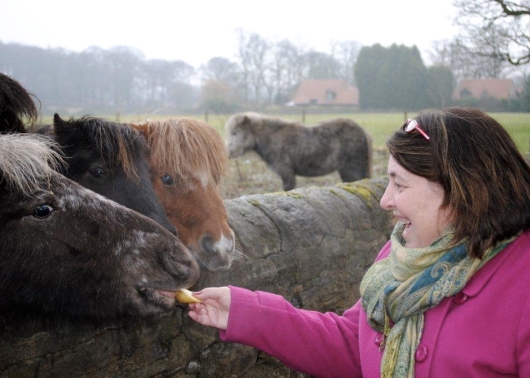 Once Upon a Time

A girl met her prince. He was tall, dark, and handsome. (Actually, he was a Republican. But he was definitely tall.) They fell in love, and got married.

He brought her to his (rented) castle and they lived happily ever after.

Okay, so thirty years of life happened between Chapters 1 and 2. They included:

In the romance-writing biz, we aim for the HEA (Happily-Ever-After), or—if we’re milking it for series potential—at least a HFN, or Happily-For-Now. (No, it doesn’t mean Hell, eFfing No…).

So it turns out that my Chapter 2 was a HFN, and I moved both into a castle in the north of England, and straight into Chapter 3.

Several years ago, we actually moved to the island, although it’s a bit bigger than I expected. We lived in one tower of a medieval castle in England.

What to really wear in a castle. And the beauty of this ensemble is that it’s also what you’ll wear to bed. Most of it at once.

I was living the dream. And apparently, the dream was really, really cold. The main thing to remember about living in a 1000+ year old pile of stone is that the builders were a lot more concerned with discouraging visits from Vikings and Scots than with heat and er… sanitation. But thanks to the sympathetic current owners of the castle, a new kitchen and bathroom took us past the original builders’ idea of facilities (which, from what I saw down in the surviving medieval rooms, pretty much involved a piece of stone with a hole in the middle). I learned what to wear. How to speak British. And best of all, what to do with my Saturdays.

As a favor to those who might be considering castle life, I invite you on a (virtual) visit. When you come, here is our typical day:

0’dark:30—the dog leaps straight from her bed to mine (or yours if the castle ghost, the White Lady, has popped in to open your door. Yes, the same door you carefully closed, locked, and probably secured with a chair under the knob. Ghosts don’t get out much, so their sense of humor is somewhat stunted…) The dog shares the breaking news. “It’s time. I hafta. Go NOW! Up, up, up. What part of pee-now do you people not get? And by the way, as long as you’re up, I wouldn’t turn down a bowl of kibble.”

One of the good things about sleeping with so many clothes on is that you just have to grab the keys, leash, and the glory that is your pair of British Wellies. Although there is no actual network signal around the castle, you should bring your phone so you can use its flashlight app to find the steaming pile the dog refuses to produce until she’s sniffed every single damn blade of grass in the meadow and churchyard surrounding the castle because, of course, this is the north of England which won’t see actual dawn for about four more hours. (Hey, I don’t want to hear your opinion of run-on sentences. It’s friggin early and we haven’t even had coffee.) Where was I? Oh, yeah. We stagger back to our tower and the exhausted dog collapses in one of the beds she keeps in every room. Tough morning; she needs a nap.

As we make the (industrial-strength) coffee, you sit in the kitchen and realize you can see your breaths.

I love you Mr. Milkman

When the coffee is ready, my brain thaws enough to remember that we went blindly past the milk that Mr. Milkman left at the portcullis, and we have a stare-down to see who will cave and go back down for the milk: the polite guest (you) or the polite hostess (ha, ha, ha, you’re funny, you are). BTW, I’ve never met him, and I really hope Mrs. Milkman doesn’t mind, but I’m in love with Mr. Milkman. He slips in even before the dog gets up, leaving adorable little bottles of organic milk, plus eggs, and rolls of butter wrapped in brown paper. We communicate via notes twisted up and poked into empty bottles I leave for him at the gate. It’s one of my all-time purest, most satisfying relationships.

My gorgeous French Émigré with the heart of darkness…

Coffee in hand, it’s time for you to witness the other significant relationship in my castle life. I’m not going to say who is dom and who is sub, but I spend a disturbing amount of my time on my knees in front of my sophisticated, elegant French partner, blowing until he’s burning hot (yes, I did write that…) and then returning every few hours to fulfill his needs again. Sometimes, even though I think I’m doing everything right, he knows I need to be punished and he vents his wrath in black oily smoke pouring back into the flat. This sets off the castle fire alarm system, which means I have only minutes to (grab keys/wellies/dog) race down the circular stairs, through the basement, up the other stairs, down the main hall, and over to the fire system in time to call off the emergency vehicles about to be dispatched. That system is clearly in cahoots with the angry Frenchie up in my living room, so I have to stand there for a few hours repeatedly pressing the “clear” button until they reluctantly agree to shut the f-up.

If it’s Wednesday, it’s Village Coffee, as I discovered my first day as a castle resident. I emerged to walk the dog, still wearing what I’d worn to bed (basically, almost every item of clothing I owned as explained above). I was immediately identified as fresh blood, captured, and marched over to coffee morning in the Victorian-era Village Hall. There may be some places where village coffee morning is a casual event. I just don’t think those places are in England. Certainly not in our village, where the weekly caffeination is the place for the major decisions, changes, and explanations of village life to be enacted over coffee and perhaps a few raffle ticket sales.

Village Coffee is also where I learned to speak British. For example, at coffee morning, I described my reaction to finding the side of my car bashed in. “I was so pissed,” I confessed. “And as the day went on, I just got more and more pissed off. In fact, by that night, I couldn’t even remember the last time I’d been that totally pissed.” There was a collective silence you could have cut with a knife. Finally one of my friends asked if I knew that pissed means drunk. All nodded sagely, and the discussion turned to the shame one felt to run out of homemade jam and have to serve (her voice lowered) jam from a shop.

What does all this have to do with a second act? Before the Castle, what little writing time I had was sandwiched into weekends, along with everything else that went with an executive career, four kids, a house, and American life. But after we moved to England—thanks to Her Majesty’s government and their very kind refusal to allow me a work permit—all my days are Saturdays. Those Saturdays multiplied until the story my daughter and I had tossed around as an idea became chapters and then a series of books.

We’ve recently moved from the Castle to our Hobbit House, a Victorian cottage with a secret garden surrounded by tall stone walls in the heart of Glasgow. My days are still all Saturdays, and the next two books in my Null City series, an anthology and Book 3, are due out early next year.

Null City Series: Superpowers suck. If you just want to live a normal life, Null City is only a Metro ride away. After one day there, imps become baristas, and hellhounds become poodles. Demons settle down, become parents, join the PTA, and worry about their taxes. But Gaby, Connor, and Carey—the three Parker siblings charged with protecting Null City—are still missing. And outside of Null City, now that the century-long secret Nonwars between Gifts and Haven are over and the Accords Treaty is signed, an uneasy peace is policed by Wardens under the command of the Accords Agency.

One Way Fare: Null City is the only sanctuary for Gaby Parker and Leila Rice, two young women confronting cataclysmic forces waging an unseen war between Heaven and Hell. Gaby and her younger brother and sister are already targets in the war that cost their parents’ lives. Meanwhile, Leila has inherited a French chateau, a mysterious legacy, and a prophecy that she will end the world. Gaby and Leila become catalysts for the founding and survival of Null City. It just would have been nice if someone told them the angels were all on the other side.

Don’t Touch: Hope flares each morning in the tiny flash of a second before Lette touches that first thing. And destroys it. Her online journal spans a decade, beginning with the day a thirteen-year-old inherits an extreme form of the family “gift.” Every day whatever she touches converts into something new: bunnies, bubbles, bombs, and everything in between. Lette’s search for a cure leads her to Stefan, whose fairy-tale looks hide a monstrous legacy, and to Rag, an arrogant, crabby ex-angel with boundary issues. The three face an army led by a monster who feeds on children’s fear. But it’s their own inner demons they must defeat first.

We’re All Human. Even When We’re Not (Anthology, Available late 2014) She’s a young witch whose goddess is house cat of unusual size. He’s a Warden policing a delicate truce between those who are human and those who… aren’t.

Round Trip Fare (Available early 2015) Carey Parker knows superpowers suck. From childhood she’s had two choices—master her warrior gift, or take the Metro train to Null City and a normal life. There are just a couple of problems with that. Her brother and sister have disappeared. The leader of the angels trying to destroy Null City might just be the one person she loves most in the world. And her new partner’s gift lets him predict deaths. Hers.

In a former life, Barb Taub wrote a humor column for several Midwest newspapers. Now that her days are all Saturdays, she’s lived with her prince-of-a-guy and the world’s most spoiled Aussie Dog in a medieval English castle and a Victorian Scottish cottage. She enjoys translating from British to American, and collaborating with daughter Hannah on the Null City series.

Where to find Barb…

Barb, thank you for sharing your adventures and your take on HEA and HFN. I could easily visualize your days in the castle and would love to hear more about the Hobbit House. The Null City series sounds intriguing. I’ve put both books on my TBR list.

21 responses to “Chapter 3: All My Days Are Saturdays”