Today, I am thrilled to feature a couple, Catherine and Donald Hersh, aka Soul Mate author C.D. Hersh. 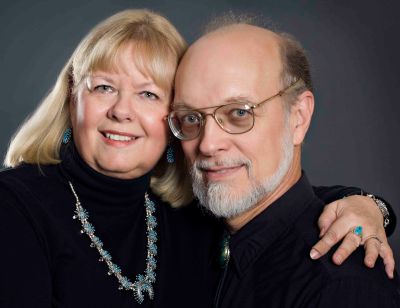 Our first act has always had writing in it, both personally and professionally, just not in the same manner as it has now. Over the years at work, Donald had become proficient at writing instructional manuals and documents for the technical work he did and was recognized for his writing by a national organization in his field. Winning the Blanche Witte Award – a highly prestigious award in his career field – was one of the highlights of his career. The award included a paid trip to Fort Worth, TX for the presentation in front of a national gathering of his peers. Catherine got to go, too.

During this time Catherine was becoming skilled at writing for the local papers with non-fiction news stories, interviews and advertorials. She branched out from the paper and started writing articles and stories published in the Cincinnati Magazine, and writing for children at Standard Publishing.

We were both involved in the drama group at church, even contributing a few short skits that were performed. One year the drama director came to us with a request to write a Christmas play they were developing as a re-creation of Bethlehem at the time of Jesus’ birth. We took a go at it, writing the play as an interactive, living diorama with the audience walking through the set as travelers looking for a place to stay. The church put the play on four out of five years running at Christmas with thousands of people coming through by the end of the run. We were even able to sell the script to churches across the country.

From this we learned we could work together (without killing each other), create a good story, and even have fun while writing. Another play we have finished is currently in the Ohio Community Theater library waiting for a local community theater to discover. We also have several more WIPs plays and musicals that, due to our second act, may never get finished.

Act Two began when Catherine gave Donald a romance book to read while we were on vacation. She thought it was a good action romance he would enjoy. Well, Donald slogged through the book and when finished, he promptly threw it away. In Catherine’s presence, he declared the male characters were weak and that we could write better characters.

As Catherine was never one to turn down a challenge she said, “Let’s do it!”

So, on the trip home we cast around for ideas to base a story on and found one along the side of the road: A sign announcing an upcoming attraction at Turning Stone Resort and Casino in New York.

After bouncing several ideas off each other about what the meaning of “Turning Stone” might entail, we began to develop our world. The Turning Stone Society is a shape shifting group that lives among us. Members have a magical blood stone ring that changes them into other personas: male, female and animal, with a few twists the usual shape shifting worlds don’t have. From there on as the old saying goes is “the rest of the story,” which has developed into a five-book series called the Turning Stone Chronicles.

Currently, the first book in the series, The Promised One, is published in both Kindle and paperback. The second book, Blood Brothers, is due out this summer. Below is a cover reveal for Blood Brothers, the blurb, and an excerpt.

When Delaney Ramsey is enlisted to help train two of the most powerful shape shifters the Turning Stone Society has seen in thousands of years, she suspects one of them is responsible for the disappearance of her daughter. To complicate matters, the man has a secret that could destroy them all. Bound by honor to protect the suspect, Delaney must prove his guilt without losing her life to his terrible powers or revealing to the police captain she’s falling for that she’s a shape shifter with more than one agenda.

The minute Captain Williams lays eyes on Delaney Ramsey, he knows she’s trouble. Uncooperative, secretive, and sexy, he can’t get her out of his mind. When he discovers she has a personal agenda for sifting through all the criminal records in his precinct, and secretly investigating his best detective, he can’t let her out of his sight. He must find out what she’s looking for before she does something illegal. If she steps over the line, he’s not certain he can look the other way for the sake of love.

Harry Williams paused at the entrance to Alexi’s ER room, hand hovering over the doorknob, uncertain when he heard the voices inside. Did she have company? He peeked in through a crack in the window curtain. The only people he recognized were Alexi and Rhys. He moved from the door, planning to return later.

“Captain,” Rhys called as he opened the door. “Come in.”

Harry stepped into the room. Going immediately to her bedside, he set the small vase of flowers he’d brought on the nightstand. “Didn’t know what kind you liked.”

Retrieving the vase, she held the flowers to her nose and inhaled. “These are gorgeous, Captain. Thank you.”

Tubes stuck into his favorite homicide detective’s arms. She seemed so helpless hooked to the equipment. Not at all like the fearless woman he knew. “You going to be okay?”

“I’ve got to stay in for a few days, but then I should be fine.”

He glared at Rhys. “How did you let her get mauled by a panther?”

“She ran in ahead of me … like she always does.”

“That’s what makes me so good,” she replied with a smile that lit her drawn face. Alexi directed his attention toward the older man.

“This is Eli McCraigen, an old friend of Baron’s, and this,” she said, pointing to the woman, “is Delaney Ramsey. Our boss, Captain Harry Williams.”

Giving Eli a cursory nod, Harry then turned toward Delaney. A pair of turquoise eyes shown out of a china doll face, with the slightest hint of a middle age crease around her cupid bow mouth. A minute past before he found his voice. “Ms. Delaney, nice to meet you,” he said with a squeak. He hadn’t jumped octaves like that since his teenage acne cleared.

Smiling, her face lit. Amused, no doubt, by him. His gaze swept over her. She had a body a man could lose himself in. When she caught him enjoying the view, she blushed and returned the favor.

The once-over caused him to respond faster than he thought possible. A woman had not made him react like that in a long time. Women were a distraction. One he’d only dallied with occasionally since his wife left him. They all ran the minute they heard he was a career cop.

Putting words and stories on paper is second nature to co-authors C.D. Hersh. They’ve written separately since they were teenagers and discovered their unique, collaborative abilities in the mid-90s. As high school sweethearts and husband and wife, Catherine and Donald believe in true love and happily ever after.

Together they have co-authored a number of dramas, six which have been produced in Ohio, where they live. Their interactive Christmas production had five seasonal runs in their hometown and has been sold in Virginia, California, and Ohio. Their most recent collaborative writing efforts have been focused on romance. The first book of their paranormal romance series entitled The Promised One (The Turning Stone Chronicles) is available on Amazon. The second book in the series Blood Brothers is coming this summer.

Where to Find C.D. Hersh…

Thank you Catherine and Donald for sharing your uplifting life story. I enjoyed reading The Promised One and look forward to the other books in the series. BTW…the storyline for Blood Brothers sounds intriguing.

7 responses to “Happily Ever After: In Fiction and In Life”