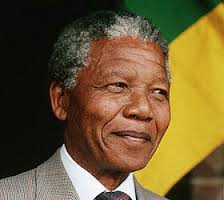 Revered elder. Symbol of perseverance and reconciliation. Father of the nation. Recipient of over 250 awards, including the 1993 Nobel Peace Prize, the U.S. Presidential Medal of Freedom and the Soviet Order of Lenin.

These are only a handful of accolades that come to mind whenever Nelson Mandela’s name is mentioned. So, it is with great sadness that we join the South African nation in bidding farewell to an extraordinary man whose life is testimony to the Power of One.

For to be free is not merely to cast off one’s chains, but to live in a way that respects and enhances the freedom of others.

There is no passion to be found playing small—in settling for a life that is less than the one you are capable of living.

After climbing a great hill, one only finds that there are many more hills to climb.

Money won’t create success, the freedom to make it will.

Education is the most powerful weapon which you can use to change the world.

When the water starts boiling, it is foolish to turn off the heat.

There is no such thing as part freedom.

I dream of an Africa which is in peace with itself.

What counts in life is not the mere fact that we have lived. It is what difference we have made to the lives of others that will determine the significance of the life we lead.