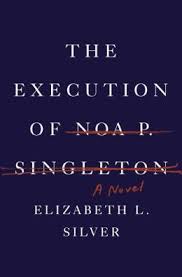 Gone Girl. The Other Typist. The Silent Wife. The Execution of Noa P. Singleton.

Introducing unlikeable protagonists who may not be reliable narrators seems to be a trend among authors launching debut novels.

In The Execution of Noa P. Singleton, we meet a young woman who is sitting on death row, awaiting execution for murder.  We quickly learn, within the first three pages, that she “was lucid, attentive, mentally sound, and pumped with a single cup of decaffeinated Lemon Zinger tea” when she pulled the trigger.

But of course there is more to her story, a story that is told during the six month period leading up to X-Day.

Somewhat reconciled to her fate, Noa is surprised by the unexpected visit of two lawyers: Oliver Stansted, a young, naive Brit who passionately believes she was wrongfully sentenced to death and Marlene Dixon, a high-powered attorney who also happens to be the mother of Sarah, Noa’s victim.

A strong advocate of a new agency called MAD (Mothers Against Death), Marlene has undergone a change of heart since testifying at Noa’s trial ten years previously. She no longer believes in the death penalty and wants to help commute Noa’s sentence. At first, she appears to be taking the high ground, but a different Marlene emerges in the letters to her dead daughter, which are interspersed throughout the novel.

Noa’s story slowly unfolds as a series of flashbacks. We read about her mother, a failed community theater actress who shamelessly neglected her daughter and the absentee father who showed up several months before the horrendous crime. In fact, his intrusion in Noa’s life sets in motion a series of events that ultimately lead to Sarah’s tragic death.

The theme of betrayal runs rampant throughout the novel. Noa’s former friends and classmates turn on her, describing her as a pathological liar with manipulative tendencies. Her mother’s acting skills fail her as she shamelessly flirts with the prosecuting attorney while testifying on her daughter’s behalf. As for her father, he didn’t even testify. After the trial, everyone disperses, leaving Noa to face ten years of incarceration before “X” day.

Author Elizabeth Silver has written a thought-provoking novel about that “gray middle ground” between legal innocence and actual innocence.