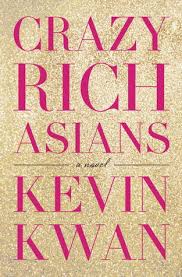 Nothing, absolutely nothing, could have prepared Rachel Chu for the life of imperial splendor that awaited her in Singapore. The exhibitions of wealth are mind-boggling and unlike anything she had ever experienced or seen in her middle-class life as an ABC (American-born Chinese). Even Peik-Lin, a well-to-do friend in Singapore, is taken aback and comments, “I have no idea who these people are. But I can tell you one thing—these people are richer than God.”

So, who are these people in Kevin Kwan’s debut novel, Crazy Rich Asians?

Very simply, they are the rich and vulgar Anglophiles who make up the Asian Jet Set. They are also the relatives of Nick Young, the dashing young professor and heir to a massive fortune, who has invited Rachel to spend the summer in Singapore.

At its heart, the novel is a modern-day Romeo and Juliet story with dashes of the Kardashians, hints of Dallas and Falconcrest, and heavy doses of the snobbery and social rules found in Downton Abbey and Jane Austen’s novels.

Not my usual fare, but I couldn’t stop reading. I was curious to see just how far Kwan would go with the absurdity and conspicuous consumption.

The tone is set in the Prologue. After a hotel manager snubs three Chinese women and their children, one of the husbands buys the property that has served as a private club for the British elite since the reign of George IV.

We learn that Astrid, the “It” girl of Singapore society, once tossed a 39-carat diamond solitaire onto the slopes in Verbier. When Astrid suspects her husband of having an affair, she visits a small jewelry shop and buys “a three hundred and fifty thousand dollar diamond ring she didn’t much care for, a twenty-eight thousand dollar bracelet she quite liked, and a seven hundred and eight-four thousand dollar pair of earrings that make her look like Pocahontas.”

As for absurd behavior…Eleanor Young, Nick’s mother, leads the pack and will stop at nothing to discredit Rachel and send her packing. She even enlists the aid of several nasty ex-girlfriends who still hope to snag the handsome and wealthy Nick.

A good beach read, a guilty pleasure or simply a book to curl up with while waiting for Season IV of Downton Abbey.

I received this book as a Goodreads giveaway. Molte grazie Random House.