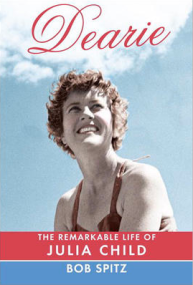 When Bob Spitz was asked to escort an older woman in Sicily, he replied, “I don’t do that kind of work.” But he changed his mind when he heard the woman was Julia Child, admitting that he had a huge crush on the six-foot three-inch cooking icon.

During that month in Sicily, Julia poured out her entire life to Spitz, and he was smart enough to run a tape recorder. He took a nine-year detour to write The Beatles and then spent four years writing and researching Dearie: The Remarkable Life of Julia Child. The result is a beautifully crafted book which was released earlier this month. An excellent way to mark the centenary of Julia Child’s birth.

While there have been many other books and movies about Julia Child, Spitz has managed to breathe new life into her story, providing us with fresh information and insights into her remarkable character.

After graduating from Smith College, Julia was a lost soul. Her marks were less than stellar and she did not demonstrate any special talents. Her adviser commented, “She would do well in some organized charity or social service work…In any case, Julia’s family is wealthy. She will not need a job I do not believe.”

In her diary, Julia wrote, “I felt I had particular and unique gifts that I was meant for something, and was like no else.” She had to weather many misadventures before those gifts started to materialize and did not hit upon her true calling until the age of forty.

In other books and the movie Julie and Julia, great emphasis is placed on her marriage to soul mate, Paul Child. I was surprised to learn that it was not love at first sight, but a gradual deepening of affection. In an early letter, Paul wrote, “I believe she would marry me, but isn’t the right woman from my standpoint.” He questioned “the lack of worldly knowledge, the sloppy thinking, the wild emotionalism, the conventional framework.” They also appeared to be physically mismatched. Nevertheless, they married and enjoyed a decades-long love.

While in Paris, she learned French, attended the Cordon Bleu and spent hours honing her cooking techniques.  What was even more remarkable is the fact that she didn’t learn how to cook until age forty. She was all thumbs in the kitchen and had to be walked through the most basic tasks. One nephew commented, “The joke was she could burn water if she boiled it.”

It took six years for Julia and her collaborators to write Mastering the Art of French Cooking. As Julia and Paul moved through Europe, she continued testing and retesting each recipe until perfection was achieved. When Mastering the Art of French Cooking hit the stores, it was a phenomenal success. It also helped launch Julia’s career in public television at age fifty.

Julia remained independent all her life, actively living and cooking until her death at age 92.