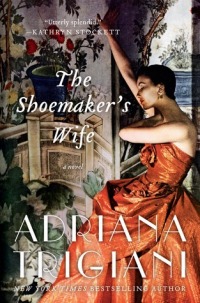 This is the novel that Adriana Trigiani was born to write.

Growing up, she enjoyed listening to her grandparents’ love story and would often jot down notes. In a recent interview, Trigiani commented on the many scraps of paper and dinner napkins she had filled with information about this “dance with fate” between Lucia (the seamstress) and Carlo (the shoemaker).

In writing The Shoemaker’s Wife, Trigiani wanted her readers to have the same experience she had when the stories were told to her by the woman who lived them.

Ciro Lazzari meets Enza Ravenelli while he is digging the grave for her youngest sister. There is an initial attraction between the teenagers, but fate intervenes when Ciro is forced to leave the Alps and immigrate to New York. Later, Enza’s family faces financial disaster and she travels with her father to New York to secure their future.

In New York, Ciro apprentices under a master shoemaker on Mulberry Street and Enza takes a factory job in Hoboken. Fate intervenes again and reunites them, but their reunion is short-lived. Ciro has volunteered to serve in World War I and Enza begins an impressive career as seamstress at the Metropolitan Opera House. While working there, Enza meets Enrico Caruso and becomes part of the Manhattan social scene. When Ciro returns, they reconnect and leave New York to create a new life in northern Minnesota. Success and heart-breaking tragedy follow.

Adriana Trigiani’s research skills are impeccable. In addition to her notes, she referred to her grandmother’s journals and travelled as far as the Italian Alps to capture the historical aspects of the story. With the help of interns, she obtained a vast amount of artifacts, among them copies of ship manifests, train tickets and silk tags from garments created by her grandmother.

Spanning three decades, from the 1910s to the end of World War II, this multi-generational epic story will resonate with anyone who enjoys historical fiction.