“The journey was the cake. The black belt was the icing.”

That’s not the comment you would expect to hear from someone who has achieved the highest belt rank in karate. But then 72-year-old Gloria Smith is not the typical karate practitioner. 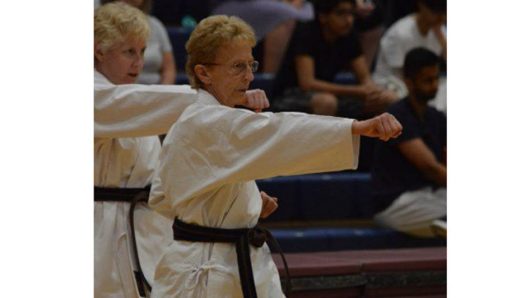 A quick look at her back-story…

• Eight years ago, Smith was diagnosed with breast cancer and underwent surgery and radiation treatments.
• One year later, she retired from teaching at age 65 and decided to take up Tai Chi at the Academy of Martial Arts in Mississauga, Ontario.
• Two years later, she noticed a promotion for an eight-week class in karate. She signed up and was hooked by the end of the course.

While on the five-year journey…

“The more I got into it, the more I realized that martial artists are more than just people who can take a punch and roll on the floor and stuff like that. It’s a total way of life. You learn discipline, courtesy, respect.

This past Sunday, Smith celebrated this spectacular achievement with her husband and son. In a recent Toronto Star article, she stressed that her journey isn’t finished. She will continue training to move up the degrees of black-belt status.

Head instructor Ian Jay added his own congratulations: “There’s nobody who’s achieved their first-degree black belt in their 70s within our schools, so that’s very rare. This was new territory. She’s doing something that no one else has done.”

BTW…There are about 3,000 students enrolled in the Academy’s schools.

• Structure your days.
• Take note of all God-nudges and God-winks. If an announcement or brochure catches your attention, pursue it.
• Enjoy the journey!!