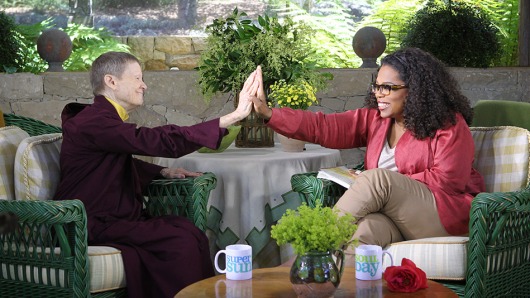 Born Deirdre Blomfield-Brown in 1936, she followed a conventional path, attending a prestigious prep school and college before marrying and having children. Later, she divorced and married a second husband who, in turn, left her at age 35. Shocked and traumatized, it took her three years to grieve and then forge an extraordinary spiritual path from wife/mother to ordained Buddhist nun. Pema learned to embrace her authentic self at Gampo Abbey, a monastery on Cape Breton Island (Nova Scotia) where she is resident and teacher.

Throughout the telecast, Pema focused on what to do when one’s life falls apart. The knee jerk reaction is to run away. Instead, Pema recommends the practice of compassionate abiding with oneself: Breathe in the suffering (unwanted discontent) and be open to it. Be right there with the feeling, taking note of all thoughts. Then, breathe out and create a lot of space. She gently reminds us that nothing wrong has happened. Life is simply pointing us in a different direction.

If you don’t know the nature of fear, you can’t be fearless.

Fear is a natural reaction to moving closer to the truth.

The sun is always shining in the rain. It never went anywhere.

Let go of fear and ego to embrace your authentic self.

If you’re invested in security and certainty, then you are on the wrong planet.

We are one blink away from being fully awake.

2 responses to “Oprah and Pema Chödrön”