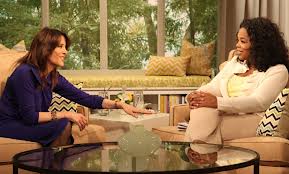 In 1992, Marianne Williamson released A Return to Love, a reflection on the principles in A Course of Miracles. The book resonated with Oprah who bought one thousand copies and invited Marianne to appear on her popular talk show. That year, A Return to Love became the fifth highest best-selling book in the United States. Since then, she  has written nine other books, among them The Age of Miracles, A Woman’s Worth and Everyday Grace. In 2006, a Newsweek magazine poll named Marianne Williamson one of the fifty most influential baby boomers.

Yesterday, the popular spiritual teacher appeared on Super Soul Sunday to celebrate the 20th anniversary of the publication of A Return to Love. A long-time fan, I enjoyed the telecast and couldn’t stop taking notes. Throughout the program, Marianne  radiated peace and joy while dispensing her many pearls of wisdom. I agree with Oprah’s final comment: “You are the best prayer I have ever known.”

So many wonderful quotations…

Love is a radical idea.

No religion has the monopoly on truth.

Every life is a platform.

The spotlight isn’t pointed at you; it radiates within you.

For every person, there is a highly individualized curriculum.

You can have a grievance or a miracle, but not both.

A miracle is a shift in perception from fear to love.

As long as you keep your heart open, the miracle will find you.

The key to happiness is the decision to be happy.

I can choose to learn the lesson through joy or pain.

3 responses to “Oprah and Marianne Williamson”