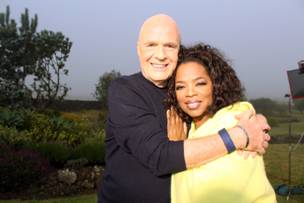 I enjoyed watching Dr. Wayne Dyer on Super Soul Sunday with Oprah. Often called the father of motivation, Dr. Dyer has inspired us with his many books and appearances on PBS.

I’ve been a fan of Dr. Dyer since the publication of his first book, The Erroneous Zones. I was surprised to learn that he wrote this book after a profound awakening moment in his life.

At the age of thirty-four, Dyer’s life was out of control. He was involved in bad relationships, overweight, not eating properly, and experiencing difficulty launching his writing career. He decided to visit his father’s grave. Having grown up hating the man who had abandoned his family and forced him to endure many obstacles, Dyer was ready to spew out all his rage. Instead, he felt an inner shift and forgave his father. He then rented a cottage in Fort Lauderdale and spent fourteen days writing The Erroneous Zones, the first of many books that would impact millions of people around the world.

At age 71, Dyer speaks and acts like a much younger man. There are no traces of leukemia and, for all intents and purposes, he was cured by John of God. He spoke at length about his experience with the Brazilian health healer.

His speech with peppered with so many wonderful insights and quotes from other writers and spiritual teachers, among them Mark Twain, Hafiz, William Blake, and Pierre Teilhard de Chardin.

My prayer is to be in the space of God and have the peace of God live and breathe through me.

If we can truly see ourselves in everyone, then we are motivated to hurt no one.

Mantra of the higher self: How can I serve?

Put into your imagination what you wish to manifest and act as if it were manifested.