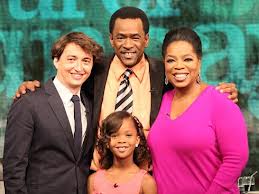 During a recent interview, President Obama asked Oprah if she had seen the movie, Beasts of the Southern Wild. Intrigued, Oprah decided to watch this fantasy drama and then added to the buzz surrounding this magical tale of hope and redemption.

This is the first feature film for the 29-year-old visionary who wanted to fill his life with wild, brave and good-hearted people. Struck by Hurricane Katrina and how people responded to it, Zeitlin decided to create an anthem to those courageous survivors who had held out for their homes and culture.

He was not looking for an acting job. Content with his bakery—later called Buttermilk Drop Bakery and Café—Henry served his delicious donuts to Zeitlin and the rest of the crew at the casting agency across the street. During a slow hour, he read for the part and was asked to return. Flattered, he refused the part because he had no intention of sacrificing his business for a possible acting career. But Zeitlin persisted, strongly believing that if Henry could start a bakery, he could be a lead actor in the film. Also, Henry had lived through Hurricane Katrina and would bring a passion to the part that no experienced actor could match.

Chosen over 4000 other possibilities, this miniature force of nature was only five years old when she auditioned for the role. While her reading abilities were limited, she impressed the film-makers with her improvisational talents. She also had a tremendous scream and the ability to burp on command.

Stand in the face of things that people say you can’t stand.

When you find someone who believes in you, take heed and respect it.

Everything in life has its own heartbeat.

Everybody loses the thing that made them. The brave men stay and watch it happen. They don’t run. (Hush Puppy)